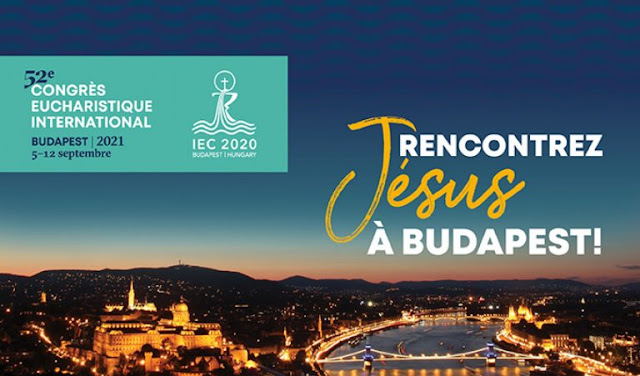 It is a great privilege and blessing for us to attend the closing ceremony of the 52nd International Eucharistic Congress at this historic and holy place, in the impressive city of Budapest.

The Eucharist forms the kernel of ecclesial life, it is the “image of the whole Economy of our Lord” (Nicholas Kabasilas). The Greek word for this sacrament, εὐχαριστία, means “thanks.” It reminds us that our lives and the entirety of creation are not our property, but rather they are a precious gift of God the Creator. The proper response for receiving this gift is gratitude and doxology. “Our service to God is fundamentally doxological in nature and essentially Eucharistic in character,” as the recently published Document, For The Life Of The World, Toward a Social Ethos of the Orthodox Church, correctly notes (§ 1). The world is given to us to be transformed and returned to God in thanksgiving and with complete joy.

Celebrating the Eucharist, we offer to God His own in the form of bread and wine, which represent the whole of creation. God transforms these gifts into a mystery of communion, κοινωνία, for the sake of the life of humans and the world. Everything is restored to its original being and purpose, just as how the Creator intended.

What we are experiencing in Holy Communion cannot be separated from our life in the world in all its dimensions. The believers who unite themselves with the Lord in the Eucharist must live eucharistically in the world; they ought to experience their presence and actions as the “liturgy after the Liturgy.” As the Encyclical of the Holy and Great Council of the Orthodox Church in Crete (June 2016) inspiredly affirmed, “Participation in the holy Eucharist is a source of missionary zeal for the evangelization of the world. By participating in the holy Eucharist and praying in the Sacred Synaxis for the whole world (οἰκουμένη), we are called to continue the “liturgy after the Liturgy” and to offer witness concerning the truth of our faith before God and mankind, sharing God’s gifts with all mankind” (§ 6).

Τhe believer, as an ecclesial being, who draws the fullness of its identity from the Eschata, cannot remain enclosed in the certainty and self-sufficiency of personal salvation. Indeed, it cannot be introverted and indifferent but rather it is creative and open, a human being with youthful breath, an existence full of joy and hope. “You are the light of the world. A city that is set on a hill cannot be hidden. Nor do they light a lamp and put it under a basket, but on a lampstand, and it gives light to all who are in the house.” (Mt. 5:14-15). A closed and gloomy Christian is a lampstand placed “under the basket.”

Worship, spiritual and pastoral life, the synodal structure and function of the Church and Christian witness in the world are nourished from the Holy Eucharist. As Metropolitan John of Pergamon states, “nothing is more ‘truly catholic’ than the Holy Eucharist. It is there where all things end up and are achieved: Baptism, repentance (= asceticism), art, and everything else belonging to the human existence and life, as well as the life of the entire creation.” [1] In the eucharistic Liturgy, the Church gathers the faithful to one body, without any distinction of race, gender, age, independent of social, cultural or financial status, to a community of love, which depicts the eschatological Kingdom of God. Indeed, the Liturgy is not only the place of a vertical encounter of each of the believers with God but a union of them in a community, a real “social event.” We cease to be individuals, becoming “relational beings.” Summarizing the ecclesiology of our great predecessor, Saint John Chrysostom, the Metropolitan of Pergamon notes the following, “The world will not be saved through the Church’s help, but rather, through becoming Church […]. If Christ is the only Saviour of the world, this is because He is the Church. Whoever attempts to reach Christ by bypassing the Church, wastes his time.” [2]

The eucharistic spirit has a tremendous transformative power for society. This way of life is the correct answer to major contemporary challenges, such as ecological problems and the violation of human rights. In this sense, the initiatives of our Church for the protection of the natural environment and the culture of solidarity were not an occasional reaction to the relative problems today, but they are rooted in the eucharistic experience and theology. This crisis was simply an opportunity for the Church to express the eucharistic disposition, to act according to this traditional ethos. The very life of the Church is applied ecology and solidarity, a school of ecological awareness and social responsibility. Consequently, every objectivation and exploitation of creation and our fellow human beings distort Christian cosmology and anthropology.

Esteemed members of the audience,

Life goes on, generations come and go, and we Christians have an unwavering certainty that the future, independent of all developments and the unexpected, will be salvific in Christ, who is the “alpha and omega,” “the beginning and the end” (See: Rev. 22:13). The Church as the “great mystery,” as “the miracle of the New” in the world, it will remain unto the ages a place of renewal and sanctification, a life of love and service, the foretaste of the final revelation of the fullness of the Divine Economy in the heavenly kingdom. The eucharistic realization of the Church in the common chalice and the shared Christian witness in the world is the vision and the dream of all of us who experience the continually existing division of Christianity as a fact, which, as Father Georges Florovsky aptly stated, “according to the plan of God should not have taken place.” For this great Orthodox Theologian of the last century, Christians everywhere “in some way belong to the same spiritual space.” It is not a matter of “parallel traditions” but of a single tradition, which was distorted and alienated. There is an “original association with a common past,” which we are always called to remember. Despite their specificities, “East and West organically belong together in the unity of Christendom.” They cannot be conceived in and of themselves; they do not comprise self-sufficient, “separate entities.” [3] “In the course of their history, they have more points of contact than of conflict or controversy.” As Florovsky said, they could be called “cultural sisters,” or, even, “Siamese twins.” [4]

We pray to the merciful God to strengthen and bless our endeavours to advance on the path to unity. When we reach this goal, the truth of Father Alexander Schmemann’s phrase will be revealed in its entirety and depth: “The Church has been founded to celebrate the Eucharist.” [5]

Thank you for your kind attention!