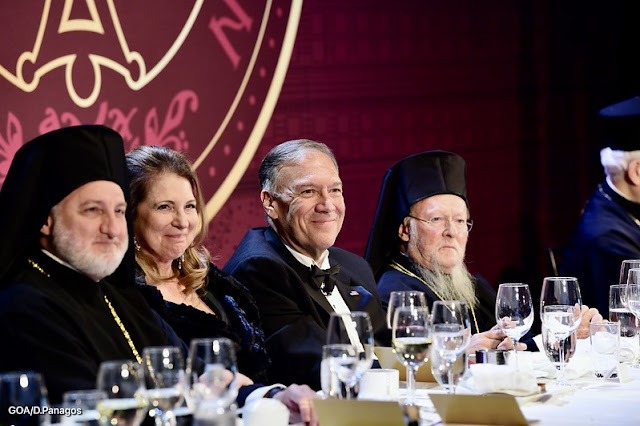 Tonight, our Patriarchal and paternal heart is replete with fatherly pride and joy, as we welcome the Founders of this extraordinary initiative on behalf of the Sacred See of Saint Andrew. Inspired and led by the Archons of our Ecumenical Patriarchate, an assembly of men and women have come together in a sacred mission.

They have assembled in order to provide and secure resources for the Holy Mother and Great Church of Christ, and they have done us the honor of naming the Foundation for our humble person.

Their love and extraordinary devotion to our Ecumenical Patriarchate of Constantinople is an example for all the world to see. We wish to acknowledge the remarkable leadership of the National Commander, Archon Aktouarios Dr. Anthony Limberakis and the National Secretary, Archon Ekdikos, the Honorable Judge Theodore Bozonelis, and Archon Notarios John Catsimatidis, National Vice Commander Archon Ekdikos John Halecky, and past President of the National Philoptochos and Communications Chair of the Foundation Aphrodite Skeadas.

With their Spiritual Advisor, Father Alexander Karloutsos, they took what had only been a dream for decades, and brought to fruition this major initiative, all with the blessing of our Most Honorable Exarch here in the United States, His Eminence Archbishop Elpidophoros.

Every participant at this Founders’ dinner deserves individual thanks, and we mention those names in the spirit of acknowledging the sacrifice of all, because you have all demonstrated your manifest love for the Mother Church and Her purely spiritual mission in the world today. We look upon you all as true hoplites of the Lord, defenders of the Ecumenical Throne. You constitute a living army of love for the Sacred and Apostolic See of First-Called Andrew, and for our Holy Orthodox Christian faith.

We are further honored tonight by the presence of the former American Secretary of State, Michael Pompeo, who addressed us earlier tonight. He proved himself a friend to our Ecumenical Patriarchate, when he visited us at the Phanar last November with his gracious spouse, Susan, who is an admirer of Byzantine iconography, an iconophile of the first order.

Mr. Secretary, you have staked out a well known position that ascribes to freedom of conscience and religious liberty the highest value that any society can hold. We applaud your dedication to these ideals and commend you for it. And we affirm with you, that the Ecumenical Patriarchate considers the freedom of religion as the core of human rights.

Over seventeen hundred years ago, the Church of Constantinople was elevated by a political decision to honor freedom of conscious and faith, when the Emperor Saint Constantine abolished the illegality of Christianity within the Roman Empire. Moving his capital to the shores of the Bosporus, he established “New Rome,” which later took his own name to become “the City of Constantine.” Since that time, the old town of Byzantium grew into the Queen of Cities that lasted over a millennium as the lighthouse of Christian theology and culture.

What was established through the Holy Seven Ecumenical Councils, which all took place either in Constantinople or in the broader area around the Imperial capital, was nothing less than the constructing of the foundation of all authentic Christianity – in theology, liturgy, church governance, and good witness in the world.[*] Thus Constantinople became the Mother Church of the East as the New Rome.

The exigencies of Christianity’s Second Millennium caused changes throughout all of Christendom. Nevertheless, the Ecumenical Patriarchate remained and remains to this day, the canonical aegis under which the Churches of the East continue to serve the Gospel of our Lord Jesus Christ. We live in modern-day Istanbul, but the lamp of Constantinople still illumines the path of the Orthodox in the modern world.

We have acted with providence for the thirty years of our own Patriarchy – by the grace and mercy of God the longest in the history of the Church – to bring back to the lands that were decimated by Communism the authentic spirit of their native Orthodox Faith. In Estonia, Albania, Czechia, Slovakia, Poland, Russia, or most recently in Ukraine – we have used our purely spiritual power to bring about restoration and reconciliation. And where secular influences oppose our mission of love and forgiveness, we all the more strongly preach and teach by example.

This is precisely why this new Foundation is such a blessing to the centuries-old mission of the Ecumenical Patriarchate. You have established a paradigm that can be followed by many others to support and sustain the Mother Church. And the Church of “New Rome” is yet working with “Elder Rome” to achieve the kind of reconciliation and common action that will bring about a renewal the world has yet to see.

As a son of the Phanar and Patriarch for three decades, we behold in the condition of the world and of humanity that we are at an inflection point. We are turning, but not in the “widening gyre” of the Poet leading to anarchy.[†] We are turning in a long process of metanoia, which means a change of heart and mind. We are turning toward environmental responsibility. We are turning to reconcile with our brothers and sisters in the world of ecumenical and interfaith dialogue. We are in a moment of opportunity –καιρὸς εὔκαιρος.

Your commitment to freedom and to the free exercise of conscience is at the very base of the Foundation you have built for the Church of Constantinople.

We thank you and we bless you for your visionary efforts.

And we commend all of you to the grace of our Lord Jesus Christ, the Love of God the Father, and the Communion of the Holy Spirit, this night and for all your days. 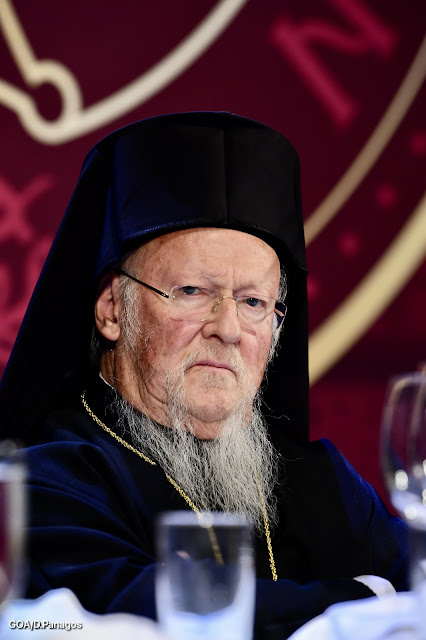 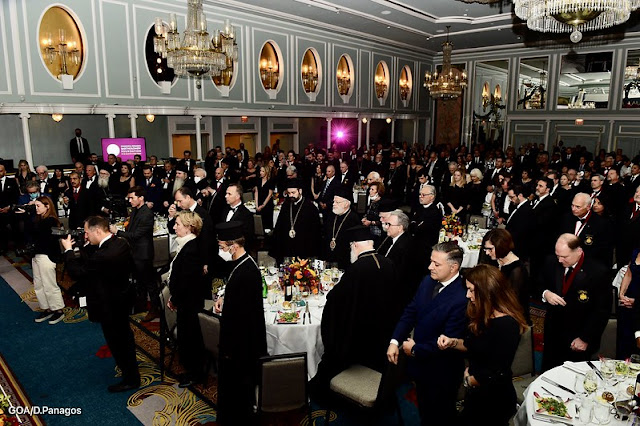 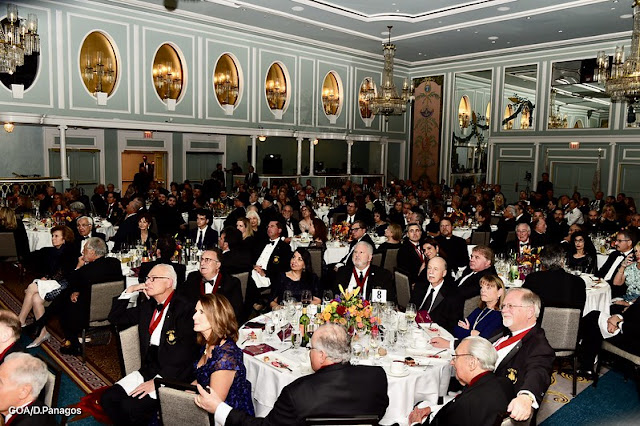 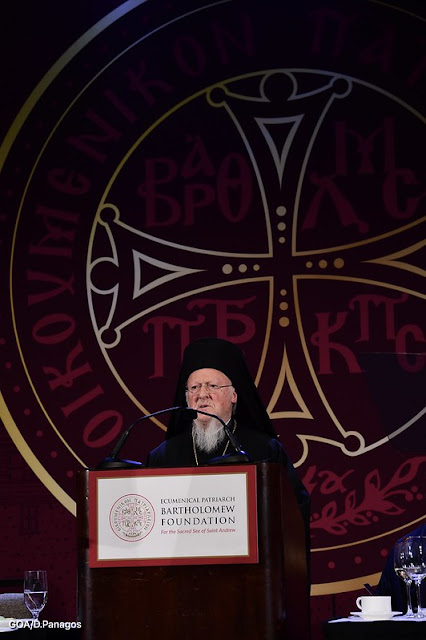 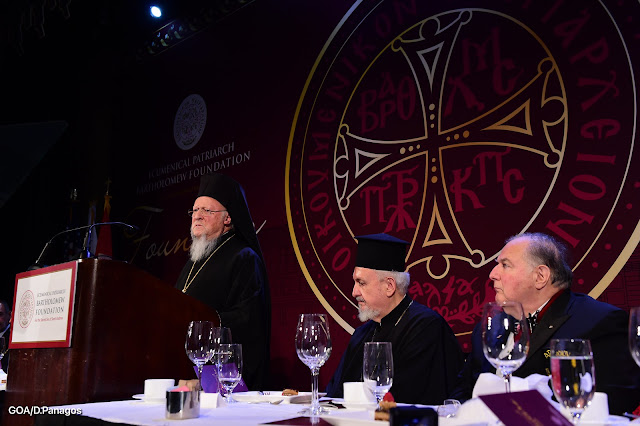 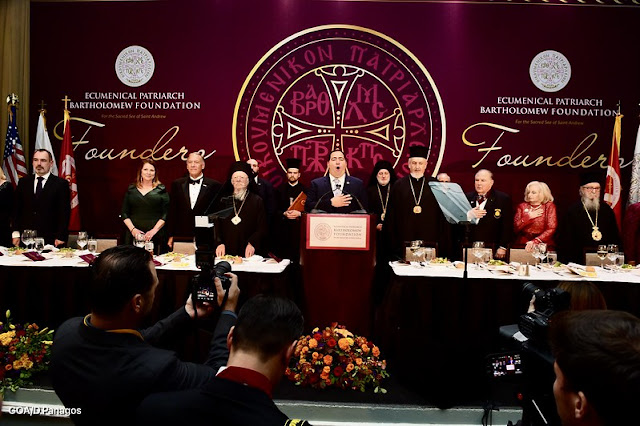 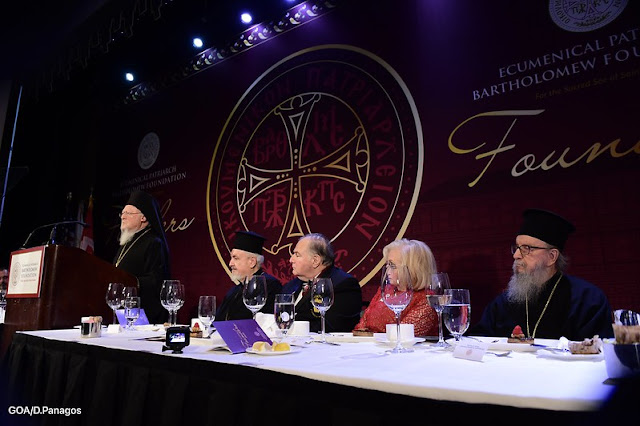 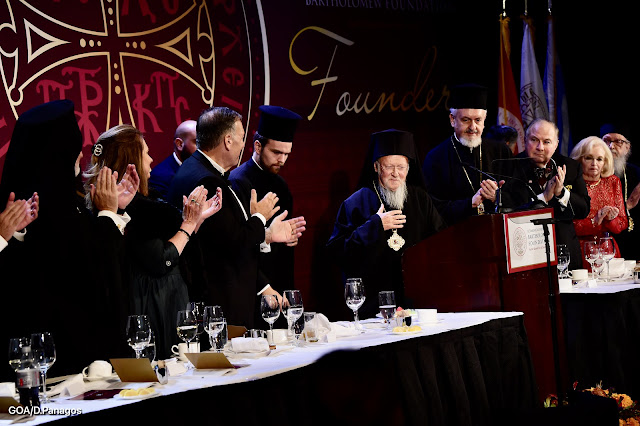 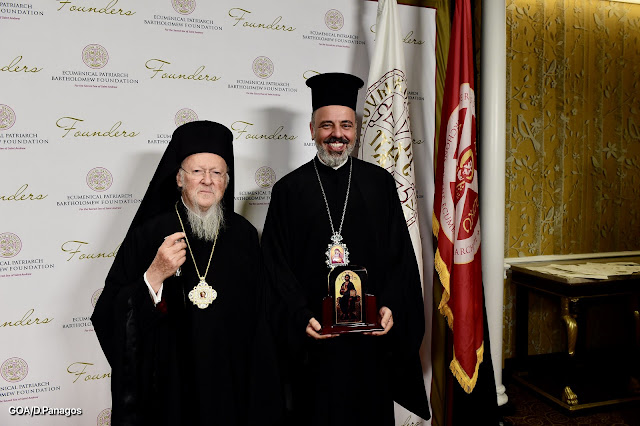 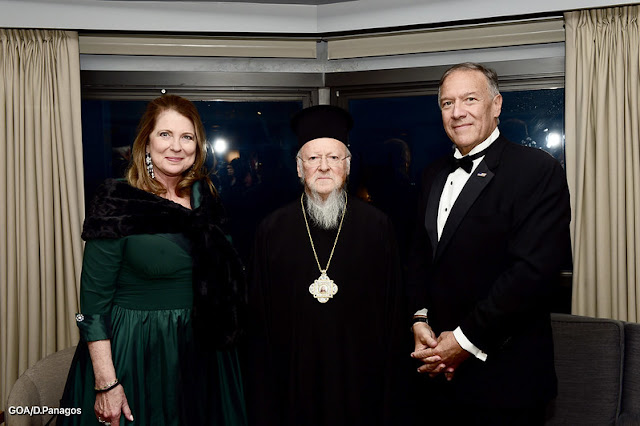 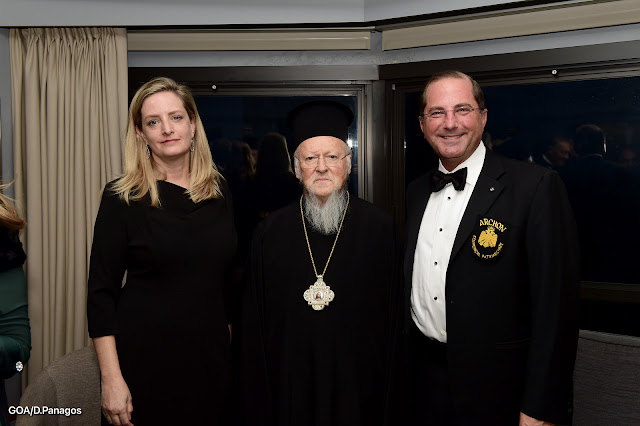 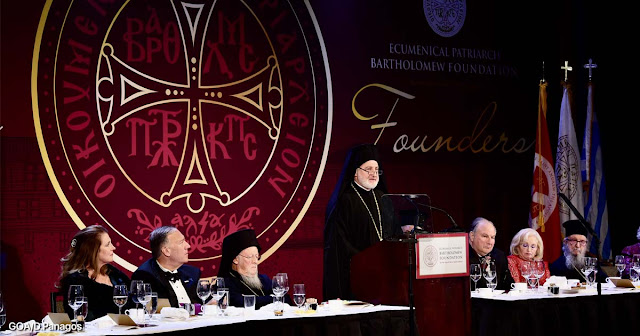 “I have had a most rare vision. I have had a dream…”[*] Thus the Great Bard, William Shakespeare, expressed it once.

But I am here to tell you, on this wonderful evening, that a most rare vision “for the equipping of the saints for the work of ministry, for the edifying of the body of Christ,”[†] is coming alive, through the formation and the endowing of the Ecumenical Patriarch Bartholomew Foundation that we celebrate here this evening.

The Order of Saint Andrew, Archons of the Ecumenical Patriarchate, has brought to life the dream that so many of us have had, literally, for decades. Through the extraordinary efforts of their spiritual advisor, the Rev. Fr. Alexander Karloutsos, Protopresbyter of the Ecumenical Throne, and spearheaded by Dr. Anthony Limberakis, National Archon Commander, a group of committed archons, laymen and laywomen have stepped forward to meet the challenge.

And what was this challenge? To provide for the spiritual ministries of the Mother Church of Constantinople in perpetuity! There is no greater honor and no more virtuous responsibility than to honor one’s father and mother, as the Decalogue tells us.[‡]

One of the Saints suggested, if you do not have the Church for your Mother, how can you have God for your Father? [§]

Together, they form the unified vision of the Church in the world — and that is, a Church that has material needs in order to meet the spiritual needs of the faithful.

And this is precisely why the Ecumenical Patriarch Bartholomew Foundation is so important for our future, as well as for the future of the generations yet to be born.

Tonight, we celebrate this amazing achievement that has established, both in word and deed, a promise for the future — thereby fulfilling the word of the Prophet and King David:

Let this be written for another generation, the people being created shall praise the Lord. [**]

And so, I would like to wholeheartedly congratulate and commend all of you who have made this reality possible through your love, dedication and devotion for the sacred person of His All-Holiness, as well as for the Ecumenical Patriarchate of Constantinople, which our Patriarch has led these last thirty years. Indeed, we pray for and wish His All-Holiness thirty more years of God-inspired Patriarchal ministry and paternal care!