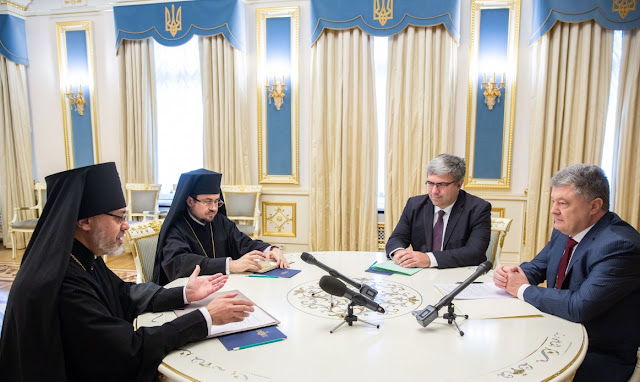 The exarchs of the Ecumenical Patriarch in Ukraine noted the leading role of President Petro Poroshenko in the process of uniting Orthodox Christians and the creation of the Autocephalous Orthodox Church.

Archbishop Daniel of Pamphylia and the Western Eparchy of the UOC in the United States of America thanked the President for his leadership and willingness to see the unity in the people of Ukraine. "I hope that we will serve together and celebrate this great union of our Ukrainian people soon," the Archbishop stressed.

Archbishop Daniel of Pamphylia and the Western Eparchy of the UOC in the United States of America also informed that he and Bishop Ilarion returned to Ukraine “to continue work on the last stage, which will bring us to the unifying Council and then to the presentation of the final document to the new primate - the Tomos of independence, autocephaly of the Ukrainian Orthodox Church".

Archbishop Daniel noted that the exarchs came back from Constantinople “with good news, with a historic event in the life of the Ukrainian nation”. "I would like to immediately convey the words of congratulations of His All-Holiness Ecumenical Patriarch Bartholomew. We had a conversation with him immediately after the end of the Holy Synod. And he asked to convey personal congratulations to you, as well as gratitude for all the efforts that you have made as President of Ukraine, taking care of the whole process of uniting Ukrainian Orthodox Christians in the territory of Ukraine," the Archbishop said.

"I think I'm not mistaken if I say that it was a historic decision of the Constantinople Mother Church concerning Ukraine, because the intention to provide autocephaly to  the Ukrainian Orthodox Church was once again confirmed," he said.

Archbishop Daniel reminded that the Synod also considered appeals of the leaders of the Ukrainian Orthodox Church of Kyiv Patriarchate and the Ukrainian Autocephalous Orthodox Church and abolished "various church sanctions" against these spiritual leaders. They were returned to their spiritual rank. As well as the clergy that cares for the people of Ukraine in these churches. "Therefore, if there are any talks about the inappropriateness or non-canonicity of the sacraments performed by these clerics, the Holy Mother Church gave the answer - these sacraments, the actions of the clergy are canonical. We are grateful to God and the Church of Constantinople, which cares for our Ukrainian people," he said.

In turn, Bishop Ilarion of Edmonton and the Western Eparchy of the UOC in Canada emphasized: "October 11, 2018 - this historic day became the day of proclamation, declaration of spiritual sovereignty of the Ukrainian people. Just like July 16, 1990 - Declaration on the State Sovereignty of Ukraine".

"Your name is inscribed in the history of Ukraine with gold letters along with the names of the rulers of Kyivan Rus’, Kyivan state, your predecessors - Holy Equal of the Apostles Great Prince Volodymyr, Yaroslav the Wise, who did a lot for the spiritual prosperity of their people," Bishop Ilarion said.

He added: "As a good shepherd, the Ecumenical Patriarchate left 99 sheep and led this one sheep to unity with this decision of October 11 - millions of Orthodox Christians, carrying out its Calvary self-sacrificial mission, which it continues to carry out contrary to its own interests and acting as the Mother Church for the sake of the future of its children, giving autocephaly from the Moscow church to the recently granted autocephaly of the Czech Republic and Slovakia. And now it's time for the Orthodox Church in Ukraine".

The President thanked the exarchs. "I am convinced that this service to the Ukrainian people is a great unifying effort that the Mother Church makes contrary to the efforts of those who impede our unity - this is the great merit of the Ecumenical Patriarch, the great merit of the Mother Church. I am very grateful to the Synod," Petro Poroshenko noted.

He also stressed that the comparison of declarations of state sovereignty and church sovereignty "is very accurate in order for the majority of Ukrainians to understand the importance of this event". "I am convinced that this date will be inscribed in the history of Ukraine as the most important. As one of the important stages of our state-building," Petro Poroshenko said.

According to the President, the meeting with the exarchs takes place today for the first time after the historic decision was made by the Synod, the decision of the Ecumenical Patriarch to grant the autocephaly to the Ukrainian Orthodox Church

"I am grateful, because this decision was made due to the prayers of the Ukrainian people, prayers of the Ecumenical Patriarch, His All-Holiness Bartholomew. And this decision is a long-awaited one in Ukraine ... I am convinced that today, as President of Ukraine, on behalf of the Ukrainian people, I must express my sincere gratitude to the Mother Church, His All-Holiness, the Synod, to all the faithful and to you personally for the enormous work that has been done for that to become possible, for the Lord to hear our prayers," Petro Poroshenko emphasized. 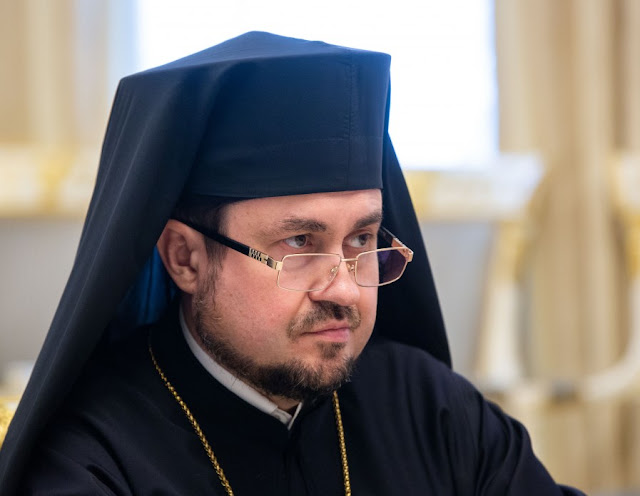