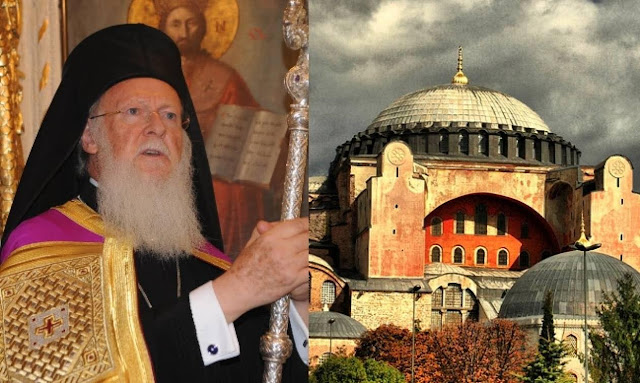 OF HIS ALL-HOLINESS ECUMENICAL PATRIARCH BARTHOLOMEW

for the Support Expressed to the Mother Church of Constantinople

We hasten to offer our sincere gratitude for your letter, wherein is expressed your deep sorrow for the decision recently taken by the Turkish authorities to convert the museum of Hagia Sophia into a mosque.

The edifice of a Christian church constitutes an insurmountable theological language, which, by architectural inspiration, rightly proclaims the faith of the Church in the Triune God, in the all-saving incarnation of God the Word and in the eschatological fulfilment and fullness of the Divine Oikonomia in the Kingdom of God.

This is the truth that is uniquely represented and proclaimed by Hagia Sophia, the Holy Church of the Wisdom of God. No intervention to its structure may conceal, deform or eliminate the jubilant message and the mission of this Church, which has rightly been described as an “architectural expression of the Chalcedonian definition,” namely an expression of the faith in the “eternal” Theandric mystery, in the union and the perichorisis of the divine and the human nature in the one Person of God the Word, “inconfusedly, unchangeably, indivisibly and inseparably.”

As such, only as a Christian temple may this magnificent sacred building correspond to its essence and to its salvific witness. Within this all-venerable place, all things praise Christ, the incarnate Word. This truth, which forms the core of the Christian faith in the Triune God, is rejected by Islam. After the conversion of Hagia Sophia into a mosque, Muslim faithful prayed for 481 years within a Christian temple, in a Christian environment, in general, and not just due to the frescoes of the Church, which were later concealed. The only use, which respects and unveils the truth and the sacred mission of Hagia Sophia, is its function as a Christian temple.

As an architectural hallmark of the in Christ deliverance of the human race and of all creation, the Church of Hagia Sophia belongs to all humankind. Its recognition as a monument of world cultural heritage is not merely connected with the incomparable magnificence of this architectural edifice, with its iconography and its ornamentation, but it also indirectly expresses the abovementioned truth.

With these thoughts, we once again thank you for the cordial and sincere expression of your love and support for the Ecumenical Patriarchate, in whose course of existence and good testimony, the spirit of Hagia Sophia has been preserved, always in unwavering faithfulness to the Apostolic traditions and in tireless care for the contemporary man at all times.

At the Ecumenical Patriarchate, September 2020