Bartolomeo I, Ecumenical Patriarch of Constantinople visits the international Centre of the Focolare

This morning His Holiness Bartholomeo 1, Ecumenical Patriarch of Constantinople paid a visit to the international centre of the Focolare Movement in Rocca di Papa. He was welcomed by Focolare President Maria Voce, who escorted him to visit the house where founder Chiara Lubich lived. He then prayed at her tomb. Joined by Co-President Jesús Morán and a small Focolare delegation, there followed an exchange of greetings and gifts. The Patriarch was in Rome for the international Prayer for Peace meeting promoted by the Community of Sant’Egidio being held at the Campidoglio (Capitoline Hill) today. Tomorrow he will receive an Honorary Doctorate in Philosophy from the Antonianum University. The Patriarch will also be meeting with Pope Francis. 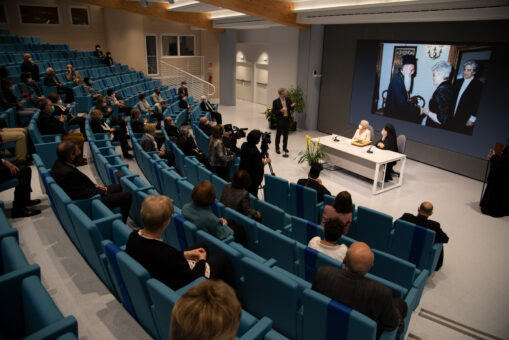 “Chiara committed herself to fraternity, unity and peace in all areas of human life, giving us a message through her life and her writings which we cannot ignore”.  With these words Patriarch Bartholomew 1 recalled Focolare founder, Chiara Lubich, during his visit to the International Centre of the Focolare Movement at Rocca di Papa this morning.

His Holiness’ delegation included His Eminence Emmanuel, Metropolitan of France, His Excellency Cassianos, Igumeno of the Monastery of Chalki in Greece, Reverend Iakovos, Patriarchal Deacon. They were accompanied by Mons. Andrea Palmieri, Under Secretary of the Pontifical Council for Promoting Christian Unity (PCPUC).

“The Movement and all the works that exist today thanks to her charism,” he declared, “testify to a life lived for the Lord, passing through the Cross, but always directed to the Resurrection”. 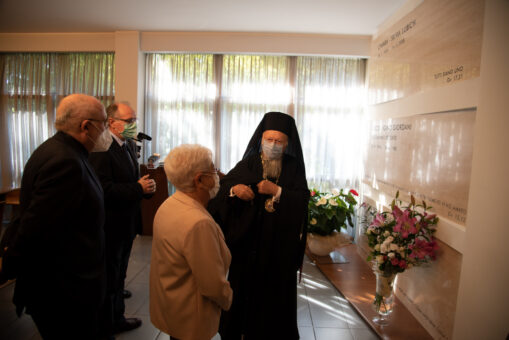 The Patriarch’s visit comes within the year of the Centenary of the Birth of Chiara Lubich: “How many other things our Chiara would have done if she were still among us!” continued His Holiness Bartholomew 1. “But it is not the years that give meaning to life, it is not the quantity, it is not the length. It is how we commit the talents that He has offered us. It is the quality of a life lived in witness to He who is the Life”.

The Patriarch arrived late morning at Rocca di Papa, to be welcomed by Focolare President Maria Voce and CoPresident Jesús Morán. With them he visited the house which had been Chiara Lubich’s home for many years, and the chapel at the International Centre which contains the founder’s tomb. Here, he wrote a long dedication in Greek in the visitors’ book. Hence to the Auditorium, where, respecting safety measures and norms, it was possible for a brief meeting with members of the Focolare’s General Council, some members of the Movement belonging to the Orthodox Church and a representative group of youth.

The Patriarch expressed his affection and esteem for Maria Voce, calling her “dear sister”, “whose friendship with us and with our Ecumenical Patriarchate is long and steadfast, since the years when you lived in Constantinople where you truly left an indelible mark of the ministry of fraternity, unity and love for all”.  He continued, “Having reached the end of your mandate as President, we also want to thank you for your great contribution to the Movement. Our memory of you, like all of you, remains in our heart, and you will surely continue the charism where the Lord calls you to”. 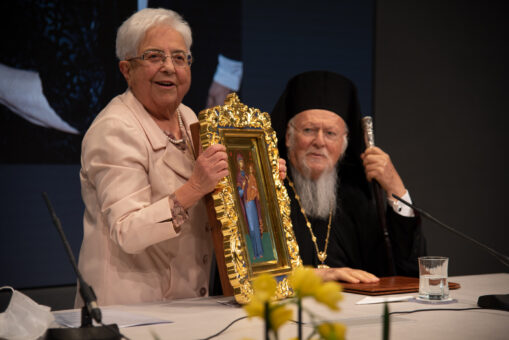 There followed a presentation of some of the events celebrating the centenary of Chiara Lubich and some Focolare youth spoke of the “United World Project”, which this year, with the motto #daretocare is focussing on care for the environment and the most fragile parts of society around the world. The Patriarch commented, “Ideas and action, theory and practice. I hope that some Orthodox youth will be included in this project to collaborate with you for the good of humanity”.
An exchange of gifts concluded the encounter. President Maria Voce offered a sculpture of the Virgin Mary with the Child Jesus which came from the house where Chiara Lubich stayed when she was in Switzerland, and the Patriarch gave a wonderful icon.