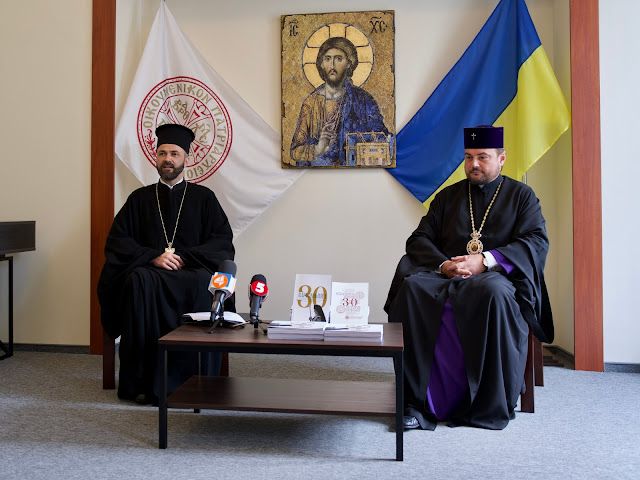 On August 18, the Stauropegia of the Ecumenical Patriarchate in Kyiv hosted a presentation of the book “Bartholomew I: 30 Years of Patriarchal Service in the Context of Ukraine.”

That’s according to a Spiritual Front of Ukraine reporter who attended the event.

The presentation took place on the eve of the 30th anniversary of Ukraine’s independence and the visit of Ecumenical Patriarch Bartholomew at the invitation of President Volodymyr Zelensky and Primate of the OCU, Metropolitan Epifaniy. Patriarch Bartholomew was one of the key figures on the way to the Ukrainians gaining their own Local Autocephalous Orthodox Church.

Presenting the book, Bishop Mykhailo (Anishchenko), Exarch of the Ecumenical Patriarch in Ukraine, said: “This publication is intended to tell the general public about the personality and life of His Holiness Patriarch Bartholomew, his connection with Ukraine and his personal efforts for the benefit of Ukrainian Orthodoxy. The anniversary of his election to the Patriarchal Throne comes on November 2 this year, so there is not much time left and, in my opinion, the visit to celebrate the 30th anniversary of Ukraine’s Independence can be considered the beginning of celebrations of the enthronement of His Holiness Bartholomew at the Ecumenical Chair.”

According to Bishop Mykhailo, low-profile Greek and English-language sources in Ukraine were used in compiling the publication, as well as materials from the personal archive of OCU Metropolitan Oleksandr (Drabynko).

Specially for this edition, for the book’s back cover, a prominent Ukrainian font designer, Oleksiy Chekal, developed a symbolic graphic composition to demonstrates the symbolic unity of the two festive events.

Bishop Mykhailo thanked Metropolitan Oleksandr, who, led by the Primate of the Orthodox Church of Ukraine, His Beatitude Metropolitan Epifaniy, has supported and assisted in the development and operation of Stauropegia from the very beginning and has made many personal efforts to have this book published.

“We believe this book will help the general public appreciate the significance and efforts of His Holiness Ecumenical Patriarch Bartholomew and organize the upcoming visit at the appropriate level, in joy and sincere prayer to God for the pious Ukrainian people, for the fruitful development of Ukrainian Orthodoxy and the welfare of Ukrainian state,” summed up the exarch of the Ecumenical Patriarch in Ukraine.

Metropolitan Oleksandr (Drabynko) of Pereyaslav and Vyshneve says that, given the timing of the two anniversaries, the Foundation of His Beatitude Metropolitan Volodymyr and the Ecumenical Patriarch’s Stauropegia in Kyiv prepared the joint edition of the book entitled “Bartholomew I: 30 Years of Patriarchal Service in the Context of Ukraine.”

“I gladly responded to the initiative of Bishop Michael, Exarch of the Ecumenical Patriarch in Kyiv, to create such a book about the Patriarch Bartholomew, as I was involved in the events described in it,” said Bishop Oleksandr.

“This year’s 30 years of independence and 30 years of service of His Holiness Patriarch Bartholomew coincide, and, in fact, to me, as a citizen of Ukraine and as a church hierarch who wanted the Local Ukrainian Orthodox Church to be set up, these two events are compatible. I am somewhat involved in church history, as I wrote my Ph.D. on history of the post-totalitarian Ukraine, and in that process, when I was working with documents, I always saw that Ecumenical Patriarch Bartholomew, whose 30th anniversary of service we’re celebrating, played an outstanding role,” said the OCU hierarch.

“Therefore, being the secretary of Metropolitan Volodymyr (Sabodan, – ed.), knowing his spiritual vision, communicating with him on these topics, being a participant in the visit of the Ecumenical Patriarch in 2008 to Ukraine, being a participant in the 2008 Synaxis, being a direct participant in signing and handing the tomos of the independence of the Orthodox Church of Ukraine, which had been a dream of the head of the UOC, Bishop Volodymyr (Sabodan), I gladly accepted it and am very grateful to the exarch for being able to serve in such an edition, which I hope will be useful to our society,”said Metropolitan Oleksandr. 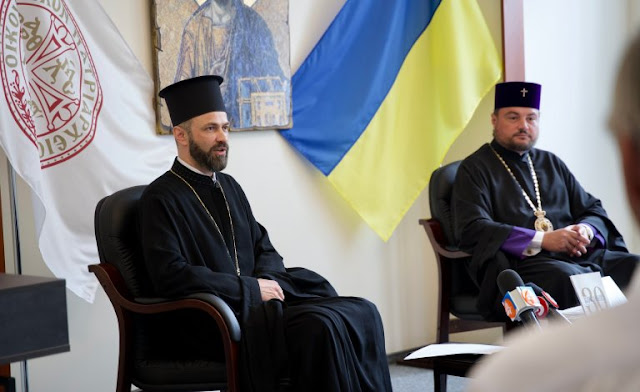