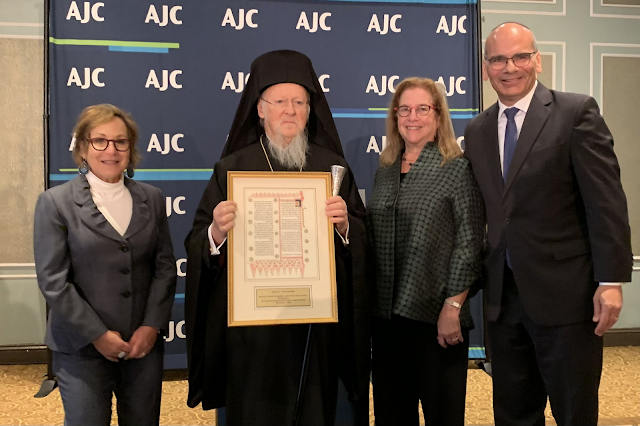 Good morning. I am Harriet Schleifer. I have the privilege of serving as president of American Jewish Committee - AJC. I am honored to open this ceremony in which His All Holiness Ecumenical Patriarch Bartholomew, spiritual leader of 300 million Orthodox Christians, will receive AJC’s Human Dignity Award.

It is my pleasure to welcome not only our Orthodox Christian friends, but also our rabbis and AJC leaders, especially the members of the Executive Council and Board of Governors, including its Chair, Tony Meyer.

Since our founding in 1906, we at AJC have understood that interreligious dialogue is essential in advancing the wellbeing of the Jewish people, indeed all peoples. AJC’s concern for the civil and religious rights of all is part of our agency’s bedrock foundation. The rejection of antisemitism and all forms of hate is not only a necessity for the Jewish people, it is the responsibility of all, in service of humanity.

We know that our core commitments to defeat antisemitism in all its renascent forms and to support the State of Israel’s quest for security and peace among the community of nations cannot happen without our inter-religious partners. Patriarch Bartholomew, the Ecumenical Patriarchate, and the Greek Orthodox Archdiocese of America have been our partners in these commitments. For that, we are grateful.

As a child of Holocaust survivors, I particularly note that the Ecumenical Patriarch visited the United States Holocaust Memorial Museum in October 1997 and described the Nazi attempt to destroy the Jewish people as an "icon of evil," and heralded the Museum as an "icon of hope.” During the same museum visit, His All Holiness also said: "We respect the role of Israel as a guarantor of the Jewish people's existence."

Fifty years ago, as a leader of the new era in Christian-Jewish relations, AJC inaugurated Orthodox Christian-Jewish relations with an historic outreach to the Archbishop of America right here in New York. AJC was a founding member of the formal dialogue between Orthodox Christian and Jewish leadership which began in Lucerne, Switzerland in March 1977. AJC continues to play a primary role in that thriving dialogue under the leadership of Rabbi David Rosen, from the Holy City of Jerusalem, and Rabbi Noam Marans, who is with us here today.

That same spirit motivated AJC in the days after 9/11 to step forward and immediately contribute to the rebuilding of the Greek Orthodox St. Nicholas Church, which was destroyed during the terrorist attack on the World Trade Center, when thousands perished. Tomorrow, on the 30th anniversary of His All Holiness’s enthronement as Ecumenical Patriarch, at Ground Zero and in the shadow of the Freedom Tower, Patriarch Bartholomew will celebrate the formal opening of the doors of the new Church and National Shrine. It was a great honor for me to represent AJC and the Jewish people at the groundbreaking and ground-blessing ceremony for the rebuilt church.

It is now my pleasure to introduce Rabbi Noam Marans, AJC’s director of Interreligious and Intergroup Relations.

Thank you, Harriet, for your leadership today and everyday as we navigate and hope to emerge from the darkness of the pandemic into the light of brighter days, like this day.

AJC CEO David Harris has long looked forward to being here for this award presentation to His All-Holiness, and only recently learned that he needed to be in Israel for meetings with the new Israeli government. David asked me to express his regrets and gratitude and warm congratulations to Ecumenical Patriarch Bartholomew on this festive award presentation occasion.

It is my honor to introduce the Human Dignity Award, which AJC presents to His All-Holiness Ecumenical Patriarch Bartholomew, an exemplar of religious leadership for people of all faiths. This AJC Human Dignity Award recognizes His All-Holiness’s singular care for humanity and the environment, exceptional commitment to interreligious coexistence, and indispensable advancement of Orthodox-Jewish relations.

As we honor His All-Holiness today, we also celebrate the special relationships that AJC and the Jewish people have developed with His Eminence Archbishop Elpidophoros of America and his predecessors at the Greek Orthodox Archdiocese of America and with His Eminence Metropolitan Emanuel of Chalcedon, who has led the Ecumenical Patriarchate’s dialogue with the Jewish people for decades. Their Eminences, both here today, are dear colleagues and friends to me, to us, to the Jewish people. We would not be here today without their contributions.

Your All-Holiness, we at AJC have been the Ecumenical Patriarchate’s partners not only in Orthodox-Jewish relations, but also in assuring religious freedom for all, especially in Turkey, home to the Patriarchate, and throughout the Middle East, where Christianity was born and is now—in many places—threatened. We have joined the Patriarch in His All-Holiness’s prophetic trailblazing in stewardship of our common home, the Earth, as essential to our care for all of humanity. Long before the whole world was talking about the climate crisis, His All-Holiness was known as the Green Patriarch.

The Patriarch’s focus on Orthodox-Jewish relations has brought us to this momentous day. To date, Jewish and Orthodox Christian leadership have held ten formal dialogue gatherings. At the third one, held in Athens in 1993, the first during Ecumenical Patriarch Bartholomew’s tenure, His All-Holiness’s message was read to the assembled, as follows:

This common spiritual origin of Christians and Jews seems today, more than ever, to offer a fruitful ground toward the rejection of the consequences of mutual prevailing hostility during the past, and the establishment of a new relationship between them, genuine and authentic, rooted in the willingness to work toward mutual understanding and improved knowledge of each other.

Your All-Holiness’s mission statement for our Orthodox Christian-Jewish endeavors rings as true today as it did nearly thirty years ago. As a result of the Patriarch’s leadership, we can celebrate those achievements and recommit to persist in our knowledge and understanding of one another.

We remember with gratitude one particular visit at the Ecumenical Patriarchate. In the wake of the horrific 2003 terrorist attacks upon synagogues in Istanbul, in which 25 died and scores were injured, an AJC solidarity mission traveled to be with the grieving Turkish Jewish community. Following our visit at the Patriarchate, His All-Holiness joined the AJC delegation at the reopening of Neve Shalom, the central synagogue, when AJC presented the mourning Jewish community with a Torah scroll, salvaged from the Holocaust. At that moment of Jewish fragility, the Patriarch’s presence strengthened our people, demonstrating interreligious solidarity in action. It was an act of compassion we will never forget. It is emblematic of the deep care for all humanity that His All-Holiness represents, and why we honor the Patriarch this day.

This AJC Human Dignity Award to be presented to Patriarch Bartholomew is an exact facsimile leaf of Genesis chapter 1 in the beautiful Kennicott Bible, the lavishly illuminated Hebrew Bible that survived from medieval Spain, during that great moment of tri-faith mutual flourishing in a Golden Age, before the expulsion of Jews in 1492. (The image appears on the front of your programs.) Combining Jewish, Christian, and Islamic artistic motifs, this Bible captures the spirit of interreligious relations which His All-Holiness exemplifies and reminds us of our great responsibility in assuring interreligious comity.

The opening of the Hebrew Bible framed here has been at the core of the Patriarch’s commitment to human dignity, which the Jewish tradition calls Kevod Habriyot, respect for God’s creations, human beings – created b’tzelem Elohim, in God’s image - and the Earth, which humans are called l’avdah u-l’shamrah, to cultivate AND protect.

I invite AJC’s chair of Interreligious Affairs Bobi Baruch to join Harriet and me in presenting AJC’s Human Dignity Award to His All-Holiness Ecumenical Patriarch Bartholomew. 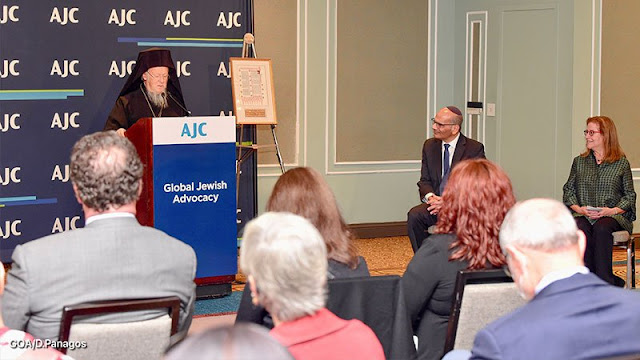 It is a privilege and an honor to receive, from the hands of such esteemed friends, this Human Dignity Award of the American Jewish Committee. Allow us to express our deepest gratitude for this expression of love and care, not only towards our humble person, but also towards what the Ecumenical Patriarchate stands for: dialogue, reconciliation and the fight against religious extremism, hatred and antisemitism.

Reflecting on the title of today’s award, “Human Dignity,” we are reminded of our common biblical understanding of what it means to be created in God’s image and likeness. Our dignity as human being depends on the sacredness of God’s image in us.

The book of Genesis reminds us of these words of creation: “Let us make humankind in our image, according to our likeness.” (Genesis 1:26) As you know so well, both of our religious traditions have explored in depth the meaning of this expression. Commenting upon this passage, the Great Midrash – also known as the Midrash Ha-Gadol – offers a beautiful interpretation, that God consulted His own heart, namely, consulted Himself while creating humankind. Thus, the imago Dei becomes the seal of God’s love for the entire world. The patristic tradition certainly built upon this hermeneutic: our dignity as human beings is based on this divine imprint in each person as the most precious gift.

Therefore, if this human dignity comes from our understanding of God’s image within each of us, how much more should we embrace and care for our fellow human being? We should be deeply inspired by a sense of the sacred that encompasses the entire creation. The seamless garment of God’s creation places the human person at the nexus of the Creator’s union with His creation. Divine and human meet in every being of this created world.

The key to guaranteeing human dignity as the bedrock to human existence is freedom. It is our prayer to the almighty God that all human beings may enjoy the fullest measure of freedom, as Saint Paul reminds us, and use this freedom to “serve one another through love” (Galatians 5:13).

We are convinced that these are principles that we share with our Jewish brothers and sisters in general and with the American Jewish Committee in particular. We would like to commend AJC President Harriet Schleifer, Mr. David Harris, Rabbi Noam Marans and Rabbi David Rosen for advancing interfaith cooperation and understanding, especially among the Jewish and Christian Orthodox traditions.

In closing, let us reflect on the words of Martin Luther King Jr.: “Darkness cannot drive away the darkness. Only the light can do that. Hate cannot extinguish hate. Only love can do that.”

To fight antisemitism, hatred, and discrimination of all kinds, we all need to be involved. The role of education and family is very important indeed, but religious communities also have a key role to play in eradicating racism, xenophobia, and antisemitism. In the midst of tragedy and challenges, God stands ready to rekindle every heart that is broken, and to restore those who have suffered great harm.

True faith does not release humans from responsibility for the world or the obligation both to respect human dignity and to struggle for justice and peace. On the contrary, it strengthens our

commitment to action and magnifies our affirmation for freedom and human dignity.

Thank you again for this honor today, for the honor of your fellowship and friendship.

Ecumenical Patriarch Bartholomew, we have honored Your All-Holiness with AJC’s Human Dignity Award, but it is the Patriarch who has honored us by elevating Orthodox-Jewish relations. The Patriarch’s warm relationships with AJC and the Jewish people, characterized by mutual respect and esteem, are palpable here today.

Ecumenical Patriarch Bartholomew, may God continue to bless Your All-Holiness’s leadership, may this visit to the U.S. continue to inspire, and may the Patriarch be given the strength to lead the faithful and model leadership for us all for many years to come. Thank you all, and have a good day. 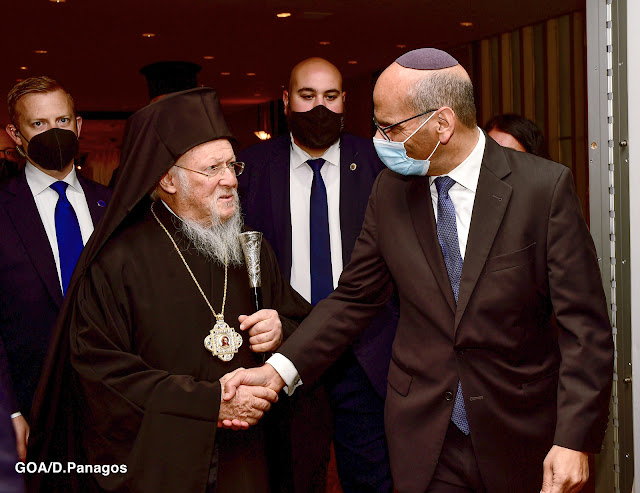 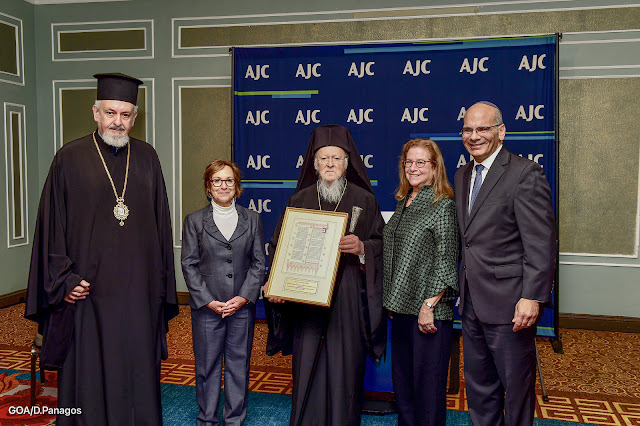 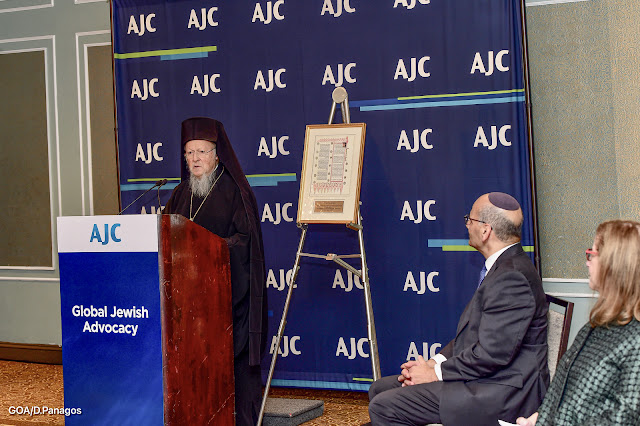 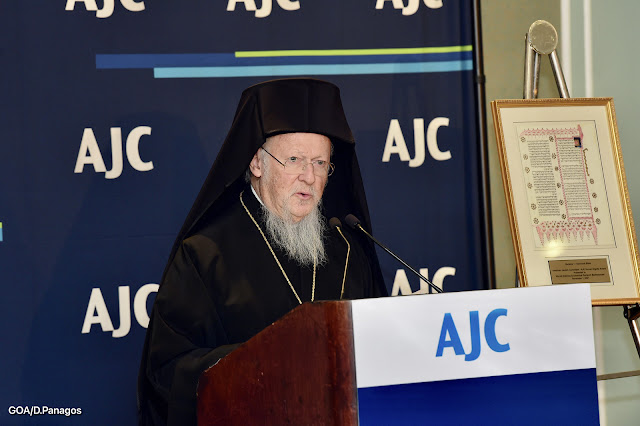