AN ELDER ON THE ECUMENICAL WAY 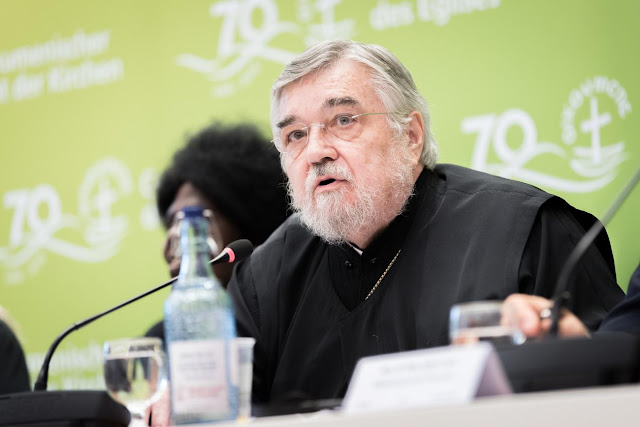 On 1st June, the Ecumenical Patriarchate has lost a prominent hierarch, gifted with a sense of ethics and trained by high education. On that day, the Ecumenical Movement mourned the loss of a devoted ecumenist who will be greatly missed. On that day, Metropolitan Gennadios of Sassima fell peacefully asleep in the Lord after having fought illness over several months.

He was only 17 years old when he engaged on his ecumenical pilgrimage, serving as a steward the 4th Assembly of the World Council of Churches (WCC) in Uppsala in 1968. After his studies in theology at Saint Sergius Theological Institute in Paris, he became a staff member of the Faith and Order secretariat in Geneva in which he served from 1983 until 1993. Later, in 1998, he became a member of the Commission on Faith and Order and was subsequently elected as its vice-moderator.

This brought him a great experience and skills in ecumenism. He especially knew how to combine a strong commitment for the promotion of Christian unity and the faithful witness of the Orthodox faith. This later contributed to his election to the WCC central and executive committees where he served for a number of years, first as a member and ultimately as vice-moderator, showing himself as a person of respect, integrity and leadership, with the charisma of holding together people with opposite views during debates.

He always welcomed young ecumenists, making them feel welcome and sharing with them his personal experience. I first met him in 2003 at the Monastery of the Life-giving Spring in Istanbul, one of the most ancient churches of Constantinople, of which he was in charge, and where several Ecumenical Patriarchs have been buried. There, the tomb of another great ecumenist, Ecumenical Patriarch Athenagoras, is found. At that time, I had just finished my doctoral thesis at the Orthodox Theological Institute in Paris, and I came to visit the monastery with other Orthodox students on a pilgrimage organized by SYNDESMOS, the Orthodox Youth Fellowship. I remember the wonderful meal he hosted for us in a paternal way and the lively discussion we had with him. Among many other topics, he then shared with me his memories as a student at Saint Sergius in Paris.

Three years later, our paths crossed again in Porto Alegre, at the 9th Assembly of the WCC where he headed the delegation of the Ecumenical Patriarchate, of which I was a member. I treasure in my library his book Orthodox Visions of Ecumenism, which he then dedicated to me in this way: “Be always faithful to your diakonia and to your Holy Church of Constantinople, in particular to His All-Holiness the Ecumenical Patriarch Bartholomew. Bon courage for your ecumenical beginning”.

Indeed, Porto Alegre was my “ecumenical beginning”. Since then, I had many occasions to collaborate with Metropolitan Gennadios: first, as a WCC central committee member between 2006 and 2013, and later, since 2016, as permanent representative of the Ecumenical Patriarchate to the WCC, as well as co-president of the Joint International Commission for the Theological Dialogue between the Roman Catholic Church and the Orthodox Church in which he served as co-secretary for many years, and in the meetings of the European Catholic-Orthodox Forum which he chaired.

Metropolitan Gennadios was a wise and experienced “elder” of ecumenism who has paved the way of the Ecumenical Movement. He will be greatly missed by many people, Orthodox and non-Orthodox. May his brilliant example and testimony inspire the new generation of Orthodox ecumenists who ought to remember Saint Paul’s words: “Remember your leaders, who spoke the word of God to you. Consider the outcome of their way of life and imitate their faith” (Hb 13:7). May his memory be eternal!