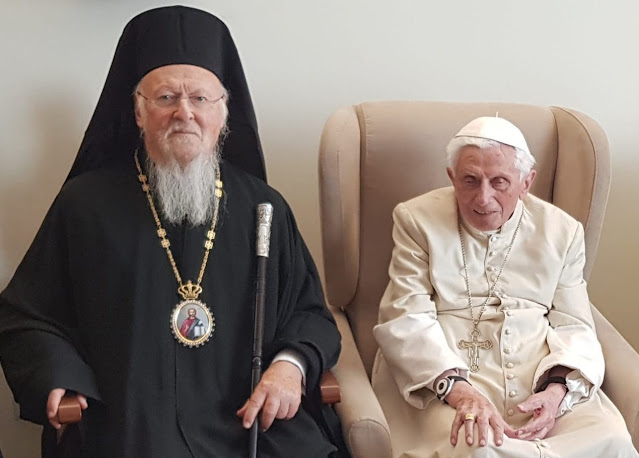 The year 2022 ended with the discreet and regrettable departure of Pope Emeritus Benedict XVI, previously also known as the theologian and Cardinal Joseph Aloisius Ratzinger. He had renounced his pontificate in 2013, and since then lived in seclusion in the Mater Ecclesiae monastery in the Vatican where he devoted himself to silence, prayer and writing. I remember having met him only once then, in June 2016, when he left to meet the cardinals in the Clementine Hall of the papal palace on the occasion of the 65th anniversary of his priestly ordination and can testify to his face luminous exhaling peace and holiness.

Immediately after the announcement of his death, our Ecumenical Patriarch Bartholomew called him “one of the greatest theologians” and “builder of bridges”. The late Pope Benedict also held Patriarch Bartholomew in high esteem. In one of the last interviews granted to the press, the one granted to the German journalist Peter Seewald which appeared in 2016 under the title “Last Conversations”, he describes the Ecumenical Patriarch as “a friend” and a “man of God”: “Patriarch Bartholomew I is not only a person of extraordinary culture, but a real man of God. I am happy and grateful that we have a true personal friendship. He even came to visit me in my little monastery” (Ultime conversazioni, Benedetto XVI & Peter Seewald, Milano: Garzanti, 2016, p. 725-726).

There is no doubt that Pope Benedict XVI was a great theologian and ecumenist who believed in the possibility of restoring the communion of the Churches. I remember when, after having taken over, in 2016, the torch of co-presidency of the International Joint Commission for theological dialogue between the Roman Catholic Church and the Orthodox Church, my predecessor, the Metropolitan of Pergamon John Zizioulas, told me that during the first phase of the dialogue, the international commission counted among its members great theologians who really believed in the possibility of achieving unity. One of them, of course, was Joseph Ratzinger. As Christ himself said, “All things are possible to him who believes” (Mk 9:23).

Nonetheless, some may wonder how this great theologian and friend of Orthodoxy was able to withdraw, a year after his election, the title of “Patriarch of the West” which the pope traditionally bore from the Annuario Pontificio in 2006, which arouses fierce controversy on the Orthodox side. As far as I know of my former professors, this decision did not emanate from him, but from the editors of the Annuario Pontificio. We are wrong to think that the pope in the Roman Catholic Church is an all-powerful autocrat who decides everything. In fact, the Roman curia, that is the administrative institutions of the Holy See that conduct the affairs of the Roman Catholic Church, is a large and complex apparatus. I think it was precisely his impotence for reform that drove Benedict XVI to abdicate, as he suggests in his “Last Conversations” with Seewald. Sometimes it is better to resign with a clear conscience than to be called responsible for the faults of others.

However, we must never forget that the Church is not merely an institution. Wanting to reduce the Church to an institution is blasphemous since the Church is above all the Mystical Body of Christ, something of which Benedict XVI was deeply convinced. As such, the Church needs true “friends” and “men of God”. “You are my friends, if you do the things which I command you” says Christ (Jn. 15:14). These are its authentic members and the true witnesses of Christ, that have “been approved of God to be intrusted with the gospel” to speak “not as pleasing men, but God” (1 Thess. 2:4). One of such was truly Benedict XVI, and we know how precious such “friends” and such “men of God” are for building bridges between the Churches and for the advancement of Christian unity. May his memory be eternal!