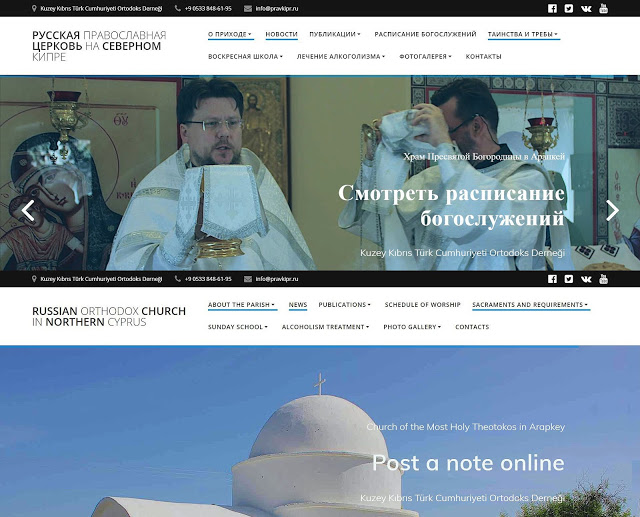 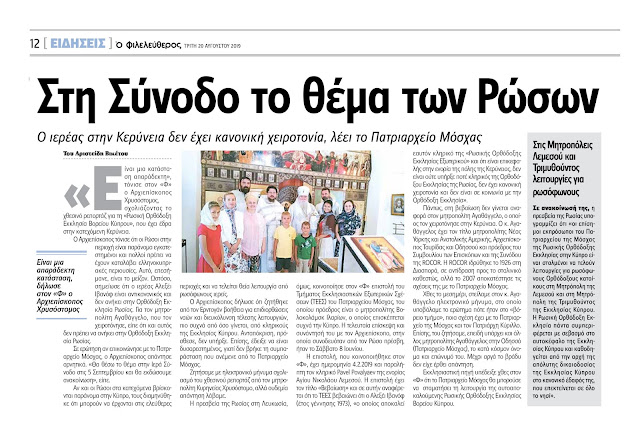 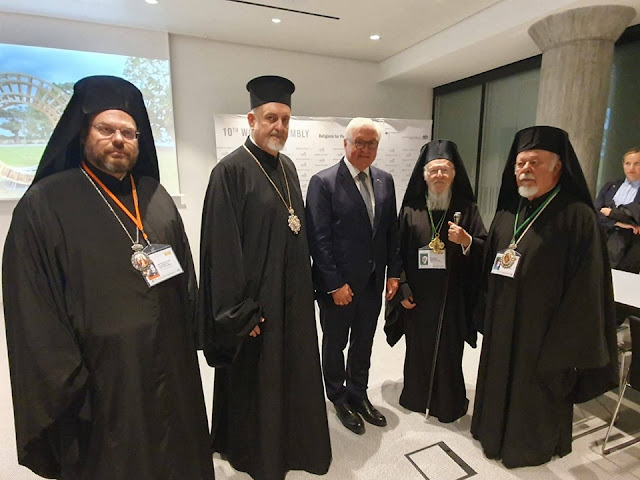 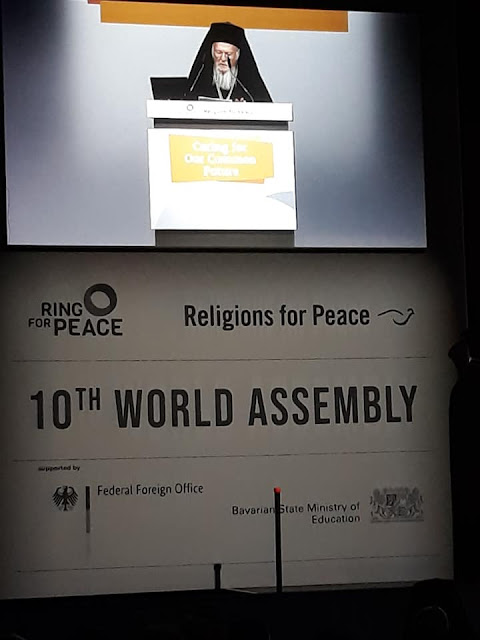 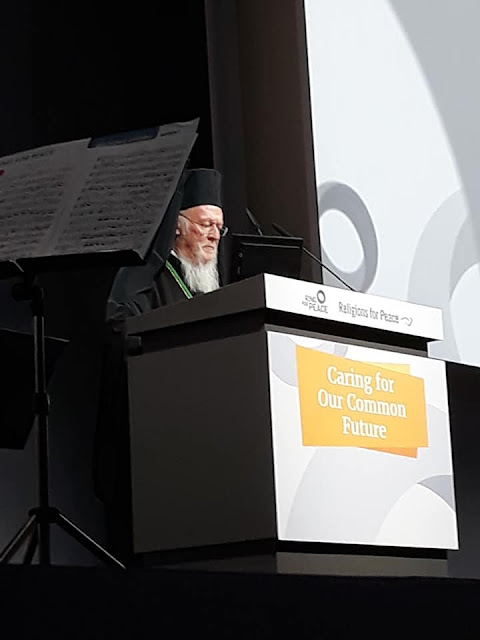 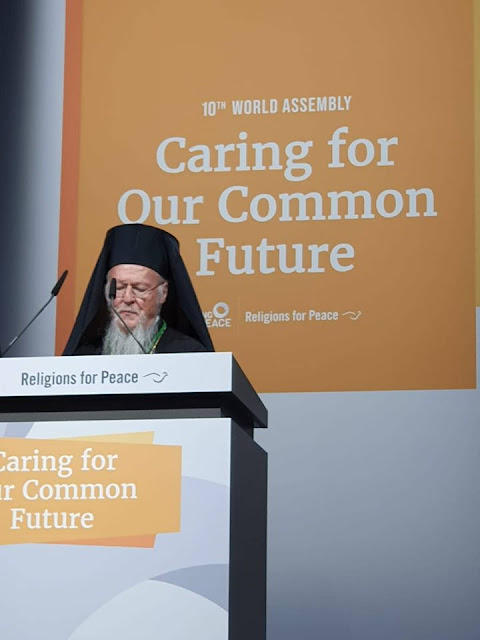 It is a great honor for us to attend the tenth gathering of the World Assembly of Religions for Peace. Today, among prominent representatives of state and religions, of the high diversity of faith-based traditions, it is our pleasure to offer the following keynote remarks on the very important theme, “Caring for our Common Future: Advancing Shared Well-Being.”

Since our election as Ecumenical Patriarch in 1991, we have unceasingly strived to raise awareness on pressing global challenges, such as the protection of the environment, the advancement of peace and reconciliation, the promotion of intercultural and interreligious dialogue, the foundation of a culture of justice and solidarity, and the resistance to all those tendencies that do harm to the dignity and sacredness of the human person and his inalienable fundamental rights. Almost twenty-eight years of active engagement with all these problems has revealed one truth: that nothing can be achieved if we work separately and independently. Nobody—not a nation, not a state, not a religion, nor science and technology—can face the current problems alone. We need one another; we need common mobilization, common efforts, common goals, common spirit. Our future is common, and the way toward this future is a common journey. This is why Religions for Peace International is so crucial, because it constitutes a unique opportunity to gather people of faith together and to express our care for the common good—at the center of which is the natural environment, currently threatened by the so-called “modern sins” of humanity.

Today, though, it is not as strange as it may once have been in the past to witness a religious institution or leader—one normally concerned with "sacred" values—to be involved in "secular" issues. After all, what does caring for peace as shared well-being have to do with our various religious missions? We continue to think, quite honestly, that one of the biggest accomplishments of Religions for Peace International, since its creation in 1970, has been the encouragement of faith-based institutions to establish fruitful cooperation and sincere dialogue with various people of diverse backgrounds—from the political scene to civil society, from intellectuals to practitioners, from theologians to technocrats, etc. The problem is that it takes effort to change our behavior, to acknowledge that we, humans, are the source of the problem and to understand ourselves as radically relational and interdependent, not only in a sociological sense, but also in a more holistic way. We are relational beings. Truth is communion, life is sharing, existence is coexistence, logos is dia-logos, freedom is common freedom. In the Orthodox tradition, when, during the Divine Liturgy, the celebrant raises up the bread and wine in order to become the body and blood of Christ, he offers this powerful prayer: “Your own of your own, we offer to You, on behalf of all and for all.” The phrase “on behalf of all and for all” means that there could not be any sacrifice, any prayer, or any glorification of God, if it did not include the whole cosmos.

Unless we are willing to sacrifice a little, then we may live our lives without even noticing the harmonious cosmic concert, the symphony of beauty being performed before our very eyes and ears. In this immense orchestra, each minute detail plays a critical role; every trivial aspect contributes in an essential way to the melody produced. Not a single member can be removed without the entire symphony being affected. No human being, tree or animal can be replaced without the entire picture being distorted, if not destroyed. When will we begin to hear the music of this magnificent harmony, this concert of peace?

The mystics of all traditions understood these plain truths. They realized that a person with a pure heart, inspired by godly virtues, can sense a connection with the rest of creation. This is where we can discern parallels in both Eastern and Western Christianity. One may recall Seraphim of Sarov (1754-1833) feeding the bear in the forest of the north; or Francis of Assisi (1181-1226) addressing the elements of the universe as his "brothers" and "sisters." The same analogy may be found in the twelfth century epic Conference of the Birds and the tenderness for all of nature in Rumi's poetry (1207-1273). These connections are not merely emotional; they are profoundly spiritual, offering us a sense of continuity and community with all of God's creation, while providing an expression of identity and compassion with the whole world. Therefore, love for God, love for man, and care for peace and creation, cannot be disconnected. While, indeed, there may be a hierarchy of priority, no sharp distinction exists between them. The truth is that we are all one family—human beings and the entire living world—and, together, all of us look to God the Creator.

The Holy and Great Council of the Orthodox Church, which convened in Crete in June 2016, stated in its Encyclical that “honest interfaith dialogue contributes to the development of mutual trust and to the promotion of peace and reconciliation. The Church strives to make ‘the peace from on high’ more tangibly felt on earth. True peace is not achieved by force of arms, but only through love that ‘does not seek its own’ (1 Corinthians 13:5). The oil of faith must be used to soothe and heal the wounds of others, not to rekindle new fires of hatred.” (§17)

Despite the criticism against religion as a source of division and fundamentalism, it is not religion, but actually the ideology of the “death of God,” proclaimed and celebrated by many in our times, which led to the most violent era ever seen in the history of mankind, the twentieth century. This era has witnessed two world wars, several genocides, unforeseen atrocities, bloody armed conflicts, exchanges of populations, the cold war and nuclear threats. Mankind is at an impasse, helpless and guideless, when “God is dead.”

Yet, in the Bible we are taught that “the fear of the Lord is the beginning of wisdom.” (Psalm 111:10). However, as we all know, today fear can become an instrument of violence when radicalism and fundamentalism—these expressions of “zeal not based on knowledge” (Rom. 10:2)—overtake the real nature of religion, which is to connect humanity with God, to guide people to the depth of the truth, to inspire a fruitful relationship between peoples, and to lead to a change of mind and life, to mutual understanding and trust. This “fear of God” is different from the one exalted by extremism. It is a transformative moment that encompasses peace and freedom, and cultivates virtue and cooperation. In Christian theology, we call this moment a conversion of heart and mind that leads to a peaceful communion with God, our neighbor and all of creation.

Despite the difficulty of the task set before us, we remain hopeful about humanity’s progression toward a state of shared well-being. This is precisely why this vision must be promoted beyond the walls of this Assembly, as well as beyond the walls of our sacred religious sites and places of worship. Religions for Peace is the center of interdisciplinary and interfaith initiatives, which serve as a catalyst for assembling leaders in religion, science, business, civil society, government and academia. At this point, we would like to thank and acknowledge the fruitful work and commitment of all those we know and do not know in this extraordinary organization. We especially commend Dr. William Vendley, who, for so many years, has been the face and driving force behind Religions for Peace International.

We live in an imperfect world and together, through common action and creative initiatives, we must make it a better world, not only for the present generation, but also for those to come. Our children and our children’s children deserve a world of freedom, of comprehensive peace and justice, of generosity and compassion, free from violence against nature and our fellowmen. We pray that the renewed solidarity and care we are all working for will become a sacred offering “on behalf of all and for all.” Thank you very much for your kind attention. 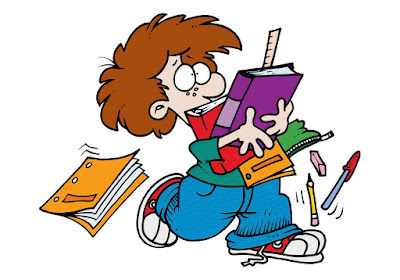