MODERN SLAVERY HAS BECOME ALL TOO COMMONPLACE 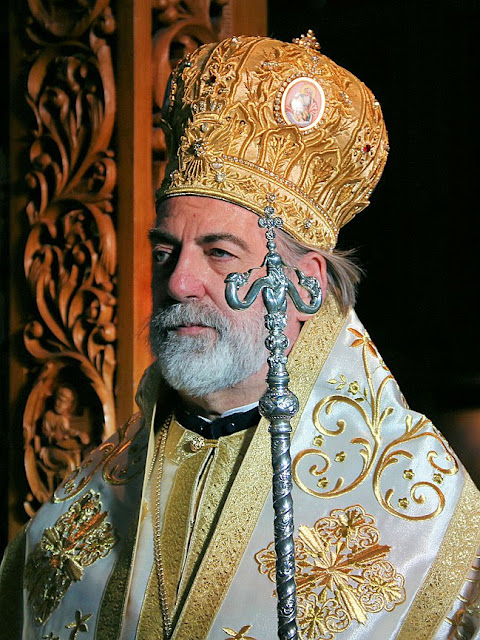 By Archbishop Nikitas of Thyateira and Great Britain

Interspersed among the top local and global news stories on television and in the pages of magazines and newspapers, stories and exposés about small and large-scale human trafficking operations and instances of modern slavery have become all too commonplace. Each and every country has a secret economy and a hidden marketplace where people are enslaved, traded and directly sold as commodities. Soon the profits and gains from these new and constantly developing “business” models will become the most lucrative of all illegal activities, overtaking both the arms and drug trades. In a world that has advanced in so many ways, we nevertheless find ourselves returning to the gravest errors and sins of our ancestors: forcing people into slavery and servitude.

In response to this transgression against the living “image of God”, His All-Holiness Ecumenical Patriarch Bartholomew took the initiative to establish a Task Force on Modern Slavery. The aim of the Task Force is not only to collaborate with government agencies and non-profit organizations dedicated to eradicating modern slavery, but also to work within the network of parishes under the Ecumenical Patriarchate to educate, offer resources and develop programs in the fight against this sin. It is often the case when addressing challenging issues and serious crimes that we perceive these problems to be detached from the concerns of our own immediate community, as if we are distanced from the causes and immune to the repercussions. The reality, though, is that our community members may not only be among the victims, but could be themselves perpetrators who directly or indirectly benefit from these crimes. While we may not believe that we have any share in the responsibility for human trafficking activities, the reality is that we may unwittingly be aiding and abetting the complex and multifaceted networks of forced labour in some way.

The Ecumenical Patriarchate’s Task Force soon set to work, researching and reaching out to gather as much material and as many contacts as possible from the existing struggle already being waged by thousands of people around the globe. The first fruits of these efforts were a series of international fora hosted by His All-Holiness. These gatherings brought together representatives of religious communities, academics, experts and activists from non-governmental organizations, and even grassroots community members in the struggle against modern slavery. Similar to the Ecumenical Patriarch’s work in the area of environmental care and protection, these efforts have challenged the global status quo, calling world leaders and faithful Christians to learn about and address this dire problem. His All-Holiness wished to become a voice for those who could not speak for themselves, to stand for those who could not make demands for their own rights, to reach out and embrace those who have been denied their dignity as human beings. The Ecumenical Patriarch also directed the Task Force to undertake all necessary and proper measures to establish programs at the local level and in parishes, to inform and cultivate awareness in priests and lay people, especially the younger generations. Pilot programmes were set up in California, with the blessing of Metropolitan Gerasimos of San Francisco, and parishes began to embrace the idea, with Orthodox communities deciding for themselves to take an active role in the fight against modern slavery. These efforts were copied and developed in other US parishes, and the work of the Task Force was seen as a new and valuable ministry in the Church community. One of the most important steps taken by the local committee in the Metropolis of San Francisco was to have a victim and survivor of human trafficking come speak to a large audience of Orthodox Christians and concerned citizens. The young woman began her presentation with these words, “My story is not a pretty one, but you need to hear it”. She then began to narrate the series of events that led her to be lured into a life of forced prostitution and how she eventually managed to escape. Those gathered had the invaluable opportunity to hear the tragic witness and courageous voice of someone who had experienced first-hand the violence of coercion and enslavement.

The initial work of the Task Force took on new dimensions as the ministry spread. In England, the Greek Orthodox Archdiocese of Thyateira and Great Britain was invited to co-host a conference with St Mary's Catholic University.  The organizing committee chose to turn their focus to survivors of trafficking and the role of the arts as a means of therapy and healing for those who have escaped the grips of slavery. This initiative is rather significant as it once again demonstrates this particular ministry’s exemplary potential not only for Pan-Orthodox collaboration, but for coordination with other churches as well.

Among the many new challenges the COVID-19 pandemic brought to the world, it also made the efforts of the Church against modern slavery more difficult. Criminals and those active in the various aspects of modern slavery have been able to remain hidden in the shadows of society, while opportunities for exploitation multiplied along with the disproportionate economic impact of lockdowns on vulnerable groups of people. It was for this and other reasons that the Archdiocese of Thyateira and Great Britain has decided to publish an educational booklet entitled Protecting the Vulnerable: Addressing the Sin of Human Trafficking and Modern Slavery. The booklet will serve to inform parents, teachers and other concerned parties of the dangers and realities of this complex issue. The book will be made available in the very near future and is a visible statement of the Ecumenical Patriarch’s serious commitment to the sacred and noble cause of defending the vulnerable. The publication is a collection of articles with the following titles: “Seek Justice, Correct Oppression: Reflections on Modern Slavery”, “Public Knowledge About Modern Slavery”, “Modern Slavery: Legal Issues, Psychological and Pastoral Orientation”, and “Human Trafficking - Modern Slavery: The Voice of an Educator”. Through these brief but informative articles, the reader is made aware of facts, statistics, legal options, and other insights, each from the point of view of different professions and specializations, all of which can serve as vital resources.

The more one reads and learns about these issues, the clearer the seriousness and the tragedy of modern slavery becomes. This sense is intensified when we realize that these problems are not so distantly removed from our own daily lives and communities as we would hope to believe. There is great power, however, in acquiring awareness of the suffering going on in the world, especially for people of faith who believe in the power of prayer combined with action. Spreading this kind of prayerful awareness that will develop into prayerful action is the hope of the Task Force, which desires to make valuable information and resources available to clergy and laity around the world as we refuse to sit idly by in the face of great suffering, no matter how daunting and hopeless the problems may seem.

— His Eminence Archbishop Nikitas (Lioulias) was born in Tampa, Florida. He has studied at the University of Florida, at Holy Cross Greek Orthodox School of Theology and at the University of Thessaloniki. He served as Metropolitan of Hong Kong and Southeast Asia from 1996 through 2007, and later as Metropolitan of the Dardanelles and Director of the Patriarch Athenagoras Orthodox Institute in Berkeley, California, from 2007 until 2019, when he was elected Archbishop of Thyateira and Great Britain. In the past, he has taught Orthodox Theology at Loyola University in Chicago, at the Holy Spirit Catholic Seminary in Hong Kong and at the Patriarch Athenagoras Orthodox Institute. At the moment, he serves the Ecumenical Patriarchate as the coordinator of the Patriarchal Task Force on Human Trafficking and Modern-day Slavery, the chairman of the Committee on Youth for the Ecumenical Patriarchate and co-chair of the Elijah Inter-Faith Foundation. He is fluent in English, Greek and Russian.