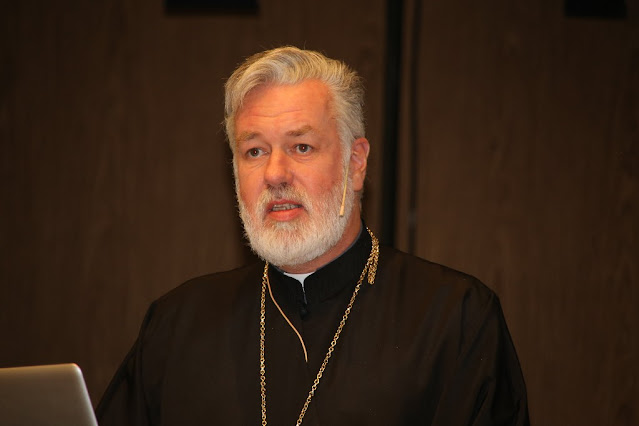 By His Eminence Metropolitan Athenagoras of Belgium

Let me start by saying some words about earlier contacts between the Anglican and Orthodox Christians. It is well known that during Henry VIII's reign the English Church broke all ties with the Roman Church and established itself independently. The Orthodox and Anglican Churches maintained friendly, scientific and diplomatic relations from the beginning. However, these relationships were overshadowed by a wave of proselytism in the late 18th and early 19th centuries. However, this crisis was short-lived. In the 17th century an exchange of letters is noted between the Archbishops of Canterbury and bishops from the East. One of them was Metropolitan Gabriel Severis, who as a Metropolitan of Philadelphia was the Exarch of the Ecumenical Patriarchate in Western Europe, based in Venice. For example, Metropolitan Gabriel writes to the Archbishop of Canterbury, asking him "to pray for the unity of the Church of Christ". A little later there were good relations between Ecumenical Patriarch Kyrillos Loukaris with representatives of the English Church, especially with Archbishop Robert Abbot and his successor. Thanks to these good contacts, Metrophanes Kritopoulos, supporter of Loukaris, was sent to England for study. This was also the case for the Great Chancellor of the Ecumenical Patriarchate, Archimandrite Nathanael Konopios, who is said to have taught the British to drink coffee. Some years later there was the establishment of the “Greek College” in Oxford (1699–1705), which offered the possibility to Greeks to study at this famous University.

These and other contacts have led to the founding of a publishing house, known as "Society for Promoting Christian Knowledge", which has produced many works on Orthodoxy. But there were also English people who visited Orthodox regions and left writings about them. Just think of Paul Ricaut. Noteworthy is also John Mason Neale who in the 19th century wrote books about the life and worship of the Orthodox Church, books that have a certain value to this day. Ecumenical Patriarch Gregorios VI has sent quite a few letters to Orthodox bishops asking them to grant the celebration of intermarriage. These are actually the first notable contacts between Anglicans and Orthodox. Later there were also contacts with Orthodox representatives of other patriarchates, such as those of Alexandria and Jerusalem, of Moscow and of Romania...

The first Lambeth Conference, in 1867, talked about the unity of the Churches. Since the 6th Lambeth Conference, in 1920, Orthodox representatives have also been invited. The Orthodox delegates were those who already participated in official and unofficial bilateral dialogues. It was the time when a lot of Orthodox immigrants came to settle in Western Europe, more specifically after the Russian Revolution and the Asia Minor Catastrophe.

At the Lambeth Conference of 1920 the Anglicans were eager to learn why inter-communion was not possible. The Orthodox stipulated that unity in doctrine was first a necessity and they asked them to give them the necessary time to explain. This slowly but gradually established a dialogue. After the Lambeth Conference of 1930 a sub-commission was established to deal with the relations of the Anglican Communion with the Episcopal Churches, thus also with the Orthodox. The Orthodox delegation was led by the Patriarch of Alexandria, Meletios Metaxakis, and had representatives of ten local Orthodox Churches. The aim was to settle up a Joint Theological Commission of both Churches. It was decided that this Commission should be appointed by the Archbishop of Canterbury and the Ecumenical Patriarch. The first Orthodox chairman was the late Metropolitan Germanos of Thyateira.

It is only after the Pan-Orthodox Conferences that took place in Rhodes that Ecumenical Patriarch Athenagoras I and Archbishop Dr. Michael Ramsey have established an official Commission for Dialogue. Its foundation dates back to 1966. This initiative was endorsed by all local Orthodox Churches. The aim of the committee is to restore the visible unity between, as Archbishop Basil Krivocheine, once an eminent member of the Commission, notably remarked: “... the aim of our Dialogue is that we may eventually be visibly united in one Church”, to which may be added that one needs “... to explore the fundamental questions of doctrinal agreement and disagreement of our Churches”.

The actual dialogue could then start, but had various phases:

3. The first series of joint talks 1973-1976, which were discussions devoted to some theological topics and concepts by way of introduction to dialogue. The adopted texts are better known as "The Moscow Agreed Statement"(1976), with topics such as: the knowledge of God; the inspiration and authority of Holy Scripture; scription and tradition; the authority of the councils; the filioque clause; the Church as the eucharistic community; the ordination of women;

4. The second series of joint talks 1976-1984, with a defined interim "crisis period" 1976-1978. These led to the second agreed statement, namely "The Dublin Agreed Statement" (1984), with topics as: the mystery of the Church; faith in the Trinity, prayer and holiness; worship and tradition.

It is clear that all texts adopted have received the approval of all participants after fervent collaboration and amendments to the final text. The first two texts adopted have reached agreement on the concept of God as a Trinity within an explicit Eucharistic context of the living Church, with the Christological and pneumatological dimensions. The Cyprus Declaration has mainly focused on two other two aspects: namely, the Church receives (the divine love of God) and the Church is received (as the salvation event and content of our faith). Curious about this Cyprus document, as Canon Jonathan Goodall noted, is that “… it was conceived as a means of placing the issue of women's ordination in the context of all major theological matters and ecclesiastical considerations that could give the Churches the best perspective on what kind of question it was and whether disagreement (a) was sufficient to demand our continued sacramental separation and (b) whether the degree of agreement offered opportunities to draw closer together, despite the apparent blocking at a 'later' stage”. That’s what Archbishop of Canterbury Rowan Williams also said at the press conference for the Cyprus report in Lambeth in January 2007, on the current problems between the churches.

The Orthodox Co-Chairman Metropolitan John Zizioulas said: “Neither side of the Commission was convinced by the other's reasons for the ordination of women. The Orthodox are not convinced that the reasons for the ordination of women given from the Anglican side are really so serious and important that they lead to this change, which, as we all know, is a renewal in the tradition. Order added nothing essential to the status of women. These topics [ordination of women and homosexuality] must be treated with the utmost care so that they do not become indelible obstacles to our community”.

It's our practice to hold a week-long plenary session of the Commission during the course of every year. Each of the Orthodox Patriarchates and Autocephalous Churches is entitled to send one delegate, and our Anglican brothers and sisters on their side appoint a corresponding number of delegates. Allowing for absentees, this means that our meetings are attended by approximately twenty persons. We also have an Executive Committee and a Drafting Committee, which meet as required. The Church of Bulgaria does not participate in the work of the Commission. We published until today 5 booklets with agreed statements. The general spirit of our meetings is warm and friendly. The Anglicans on the Commission are close in their theological outlook to the Orthodox. We are making slow but steady progress in mutual understanding. For this reason, I fully agree with the opinion of Metropolitan Kallistos of Diokleia, “that the Orthodox-Anglican dialogue is yielding positive results and should be continued”. Let me also mention that there is a good article from Professor Bogdan Lubardic, published in a book edited by the Orthodox Academy of Volos.

— His Eminence Metropolitan Athenagoras (Peckstadt) of Belgium was born in Ghent, Belgium. After some years of law school at the University of Ghent, he began study at the University of Thessaloniki in Greece where he graduated with a Master's degree in Theology. He continued his studies at the Ecumenical Institute of Bossey. In 1989, he was ordained to the diaconate by Metropolitan Bartholomew of Philadelphia (presently the Ecumenical Patriarch). Later, Metropolitan Panteleimon (Kontogiannis) of Belgium ordained him as a priest. In 2003, he was elected as auxiliary bishop to the Metropolitan of Belgium. Since 2013, he serves as the Metropolitan of Belgium and Exarch of the Netherlands and Luxemburg, following the retirement of his predecessor Metropolitan Panteleimon. As metropolitan of Belgium, he represents all Orthodox Christians towards the Belgian and Luxemburg authorities. He also serves as the president of the Orthodox Bishops Conference of the Benelux and co-chair of the International Commission of the Dialogue between the Anglican Communion and the Orthodox Church. He speaks Flemish, Greek, French, English, and German.