30 YEARS AT THE SERVICE OF CHURCH UNITY 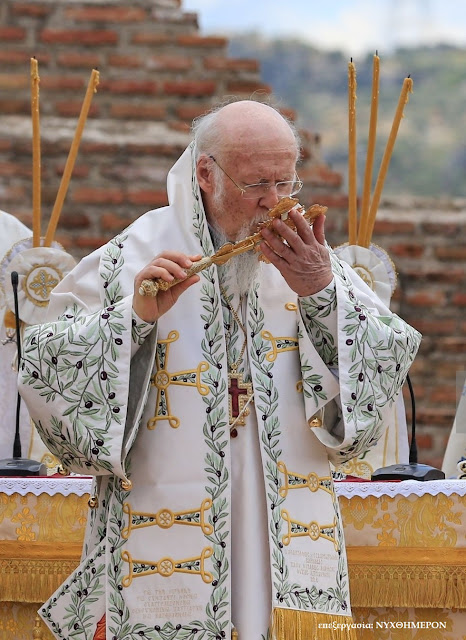 This 22 October 2021 marked the 30th anniversary of the election of Patriarch Bartholomew to the Apostolic and Patriarchal Ecumenical Throne of Constantinople. By his election he was entrusted not only with the ministry, as primate, of maintaining the ecclesial unity within his local Church, the Ecumenical Patriarchate, but also the ministry of ensuring pan-Orthodox unity, the Ecumenical Patriarchate being historically the first see of the Orthodox Church. Indeed, as a renowned Orthodox theologian of the 20th century, Father Alexander Schmemann, once said: “universal unity demands a universal center, a universal First Hierarch. And who, if not he, shall take upon himself the care of this unity, the testimony of this unity, the initiative for healing diseases? The Orthodox Church has always had such a center, and still has it in the see of Constantinople.”

Holding a doctorate in canon law, having defended an important thesis at the Gregorian University of Rome under the supervision of the renowned Professor Ivan Zuzek on the codification of sacred canons and canonical ordinances in the Orthodox Church – a matter of great importance, which has still not been resolved to this day and which often is the source of many misunderstandings, disagreements and errors within contemporary Orthodoxy – Patriarch Bartholomew is aware of the duty of the first throne of Orthodoxy to maintain the unity within the Orthodox Church throughout the universe and to be the protector and the guarantor of the canonical tradition.

It is in this spirit that he has served faithfully as the head of the Ecumenical Patriarchate for thirty years and this has revealed him as a great Ecumenical Patriarch. His main contribution which will forever mark the historical path of Orthodoxy is to have instituted the regular convocation of the synaxis of the primates of the local Orthodox Churches since 1995, to have gathered and presided over the Holy and Great Council of the Orthodox Church in 2016 – a project that appeared at the beginning of the 20th century and which was close to the heart of his predecessor Patriarch Athenagoras – and finally, to have taken the risk in 2018, without being afraid of opposition, threats and political pressures, to cure the ecclesiastical crisis in Ukraine and to grant autocephaly to the Church of this country which had been converted to Christianity by the Church of Constantinople at the end of the 10th century.

Canon law in the Church should not be seen as a mere application of rules or the granting of exceptions, just as it cannot be reduced to pure ecclesiastical administration. The ecclesiastical canons are truly holy and sacred because they impart the wisdom of the experience of life in Christ illuminated by the Holy Spirit. For this reason, they have a theological content and are fundamental not only for ecclesial life, but also for a theological understanding of the Church. For this reason, as Patriarch Bartholomew rightly pointed out during one of the pre-conciliar pan-Orthodox meetings, canons are not a museum piece, but reflect the lived experience of the whole body of the Church responding to the demands of each era.

Since his graduate studies in Rome and at the Ecumenical Institute of Bossey, Ecumenical Patriarch Bartholomew is well aware of this, and for this reason, during the 30 years of his patriarchal ministry, he has not ceased to work also for the restoration of Christian unity, maintaining fraternal relations with the Roman Catholic Church, the Anglican communion, the Churches of the Protestant Reformation, without of course forgetting the ancient Oriental Churches.

His role within the World Council of Churches, with which he is very familiar, having served its various bodies, including the Faith and Order Commission, is truly prophetic. Four years ago, as this fellowship of Churches celebrated its 70th anniversary, he stated: “As an instrument of its member Churches, the Council, which not only engages in theological dialogue but also demonstrates solidarity and mutual love, must join forces more closely in order to reach out more effectively to human beings who suffer today in so many ways.” And he added: “Our constructive and fraternal collaboration within the World Council of Churches strengthens us in our quest for unity and in our witness to the universality of the Gospel, which has enabled us until now to contribute at various levels to promoting peace in the world and a culture of solidarity among humanity. But let us never forget that the fruit of unity cannot ripen without divine grace.”

This is precisely what Ecumenical Patriarch Bartholomew continues to teach us through his personal example, through his patriarchal ministry of thirty years, “ceaselessly indicating the way of dialogue, in charity and in truth, as the only possible way for reconciliation between believers in Christ and for the re-establishment of their full communion”, as Pope Francis said so well in his letter of congratulations. Let us give thanks to God for such a spiritual leader and let us try to imitate his faith and his life. Έτη πολλά, Παναγιώτατε! May God grant you many years, Your All-Holiness!