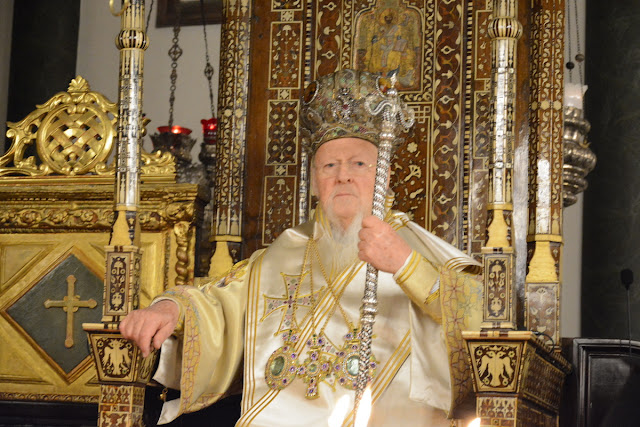 Beloved children in the Lord,

The glorious “Christ is Risen” has resounded again and has reached the ends of the earth and the heavens. The human race exults and celebrates; those from the beginning, contemporary humanity and the generations that will live until the coming of the King of glory. Creation, which is renewed in the Resurrected Christ, concelebrates. We sing during the Paschal Matins: “Now are all things filled with light; Heaven and earth, and the nethermost regions of the earth.”

Pascha is a festival of never-setting light. Christ is “the light of the world.” Light, not for the few chosen, but for all without exception, without discrimination. God of ultimate Philanthropy and the Giver of All provides the human face insurmountable dignity. Man becomes a partaker and communicant of eternal life. And whoever loves “brother” remains “in the light” (1 John 2:9). Whoever ignores his brother, impugns him, harms him, and turns against God Himself.

Tonight, our thoughts are with martyric Ukraine and in all the corners of the earth, where violence and the violation of human dignity prevail. Let us pray, brethren and children, that the Lord’s Pascha, the “peace from above, which transcends all understanding,” the Resurrection that transmitted us to the “other life,” to eternal life, to make a crossing, a passage, towards the peace of the whole world, peace of the peoples, which humanity so desperately needs. Let us ask the Risen Redeemer that this year’s Pascha will be the impetus to open humanitarian corridors, safe passages to truly safe areas for the thousands of people surrounded in Mariupol, civilians, among them the wounded, the elderly, women and many children. The same applies to all other regions of Ukraine, where an indescribable human tragedy is unfolding. Tonight, on this blessed night, we call once again for an immediate end to the fratricidal war, which, like any war, undermines human dignity and is a provocative violation of the Lord’s commandment of love for our fellow human beings.

It is not possible to live “as He never came,” He, the Saviour of the world. By raising our voice, we also declare tonight this joyful message that truth and grace have come and that “the shadow has lifted.” We affirm that this constitutes the quintessence of our lives as Christians, who have a “Paschal conception of life, death and eternity.” Christ’s victory over death permeates our existence with springs of eternal life and directs us to the “one thing that is needed.” The splendid Resurrection of the Lord fills our lives with joy and turns it into a daily Pascha. We know with certainty that the forces of evil, violence and injustice, which continue to plague humanity, will not prevail in the end.

We arrived at this blessed Sabbath, as the Church, through a period of ascetism, fasting and repentance, which gave off the fragrance of the Resurrection. We will enter the all-bright Patriarchal Church of the Great Martyr Saint George the Trophybearer to the most festive service of the ecclesiastical year, which vibrates with dynamism and the joy of the Resurrection of Christ and uniquely depicts the light-flow and fullness of the life of the Kingdom of the Eschata, where the “children of light” will gaze at the Lord of glory “face to face.”

To Him are the glory and the honour and thanksgiving.