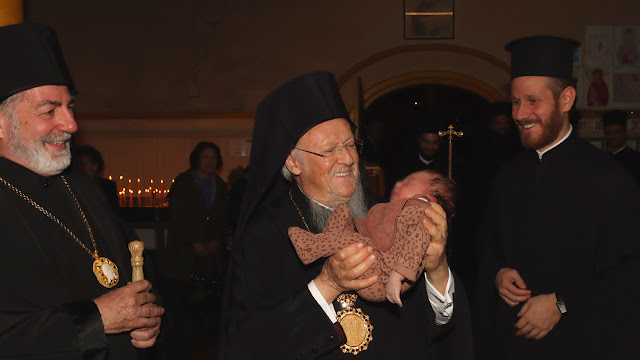 Your Eminence Archbishop Nikitas of Thyateira and Great Britain,

Beloved Archons of the Mother Church of Constantinople,

It is truly a joy and delight for us to share this meal with all of you. Because we have long observed your tireless witness and sacrifice in support of the Ecumenical Patriarchate. And we have long witnessed your undivided devotion and commitment in the service of the Greek Orthodox Archdiocese of Thyateira and Great Britain. Your unfailing assistance and encouragement lightens our burden in the many and varied challenges that we face in Turkey, in Europe and throughout the world.

Year after year, you worthily defend and promote the religious rights and freedom of the Ecumenical Patriarchate, enabling us in turn to do the same by advocating and advancing inter-Christian and inter-religious dialogue. Moreover, your patronage and encouragement sustains us as we seek to champion the preservation of God’s sacred gift of creation, which we have done for many decades now, but also the protection of human life against modern slavery and trafficking, which we have undertaken more recently with the leadership of Archbishop Nikitas and with the fruitful collaboration of the Anglican Church.

Even as we struggle for righteousness and justice in a world of turmoil and a time of crisis, we nevertheless know and find strength in the fact that we have a vast “cloud of witnesses” in the saints of our Church, especially those who founded our church, such as St. Andrew the First-Called and St. Stachys his disciple, but also our predecessors on the Throne of Constantinople, such as St. Gregory the Theologian and St. John Chrysostom. At the same time, however, we are strengthened and sustained by you, dear Archons. For, you are the ones who uphold the reputation and ministry, the status and honor, of the Church of Constantinople in all parts of the planet and all Eparchies of the Throne.

As you know very well, the entire world is only just emerging from the global pandemic that threatened and took so many lives, while at the same time revealing the generosity and dedication of doctors and carers. From the Phanar, we paternally motivated our clergy and laity in parishes across the globe to learn from the knowledge of science, to abide by the regulations of local and national authorities, and to act compassionately toward the most vulnerable among us.

And today, the unjustifiable war in Ukraine has resulted in fratricide and plunged the entire world into insecurity. From the Phanar, in conversations with our hierarchs and in communications with other religious leaders, we unceasingly appeal for peace and reconciliation, especially in this unjustifiable bloodshed among Orthodox brothers as a result of the unprovoked attack by the Russian Federation on the sovereign territory of Ukraine. We can never accept the callous position taken by Patriarch of Moscow in this regard.

Therefore, beloved and faithful children, allow us warmly to invoke upon all of you the strength of the Almighty God in order that you might continue to serve the Great Church of Christ with your distinguished enthusiasm and loyalty. May God continue to bless you and your families with His abundant mercy and grace.