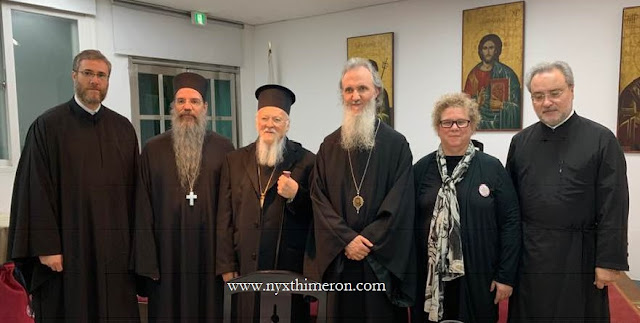 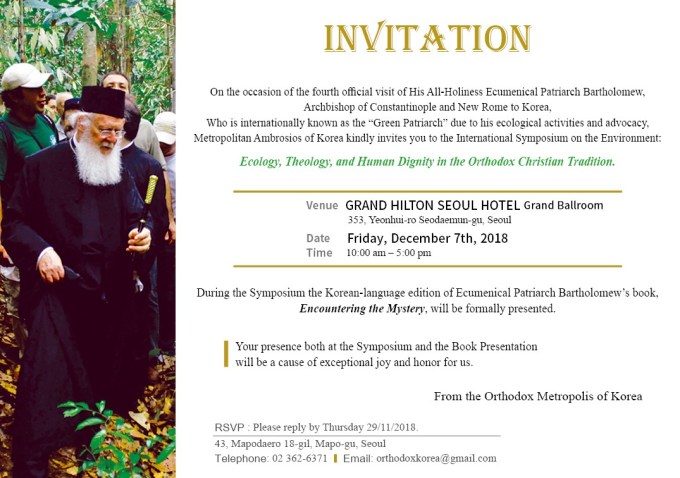 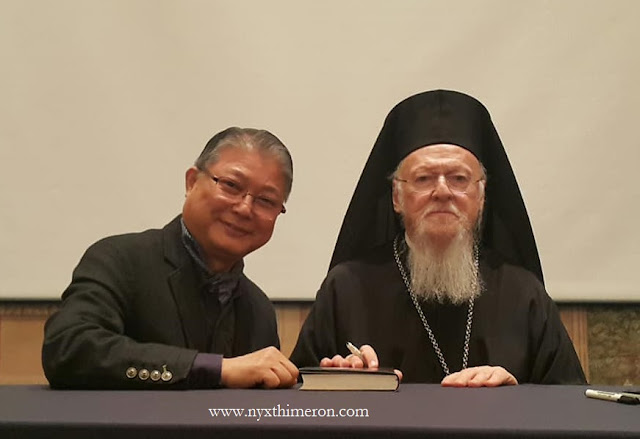 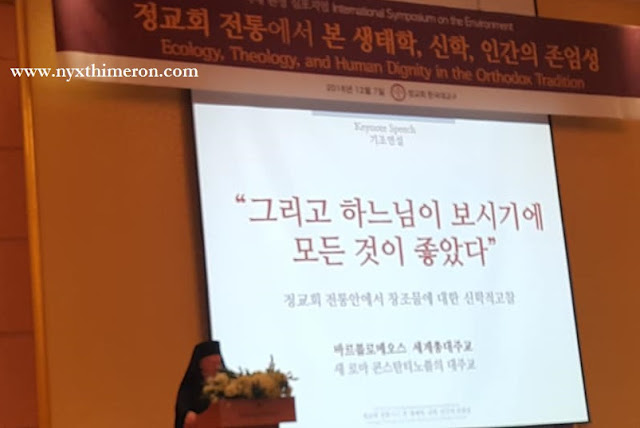 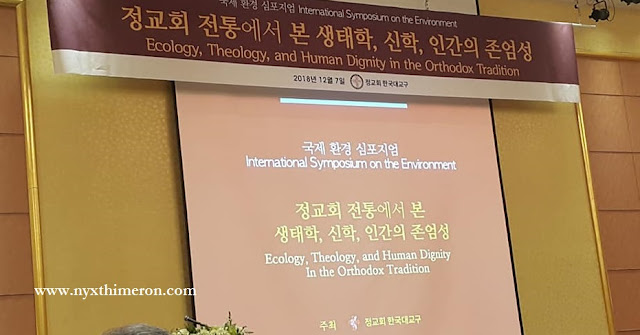 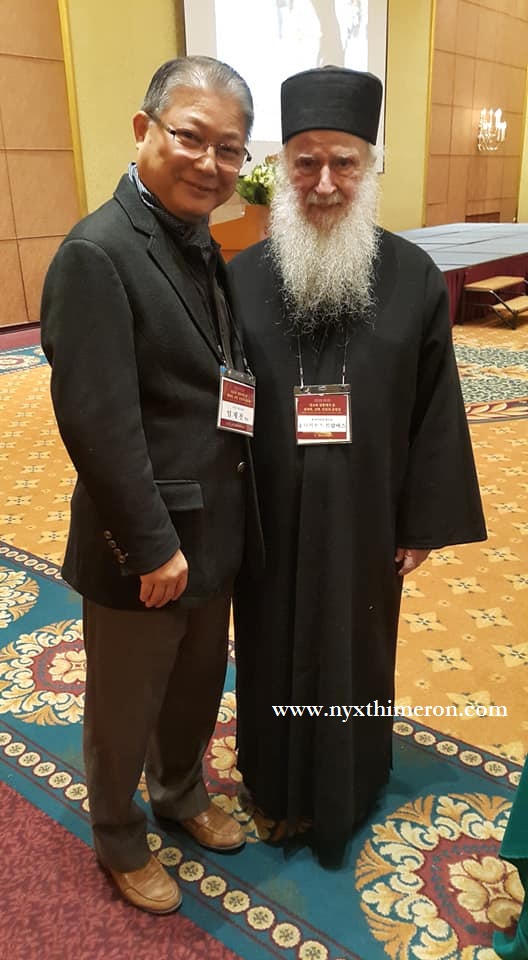 Introduction: Reading the Book of Nature

At first glance, it may appear strange for the leader of a religious institution concerned with “sacred” values to be so profoundly involved in “worldly” issues. After all, what does preserving the planet have to do with saving the soul? It is commonly assumed that global climate change and the exploitation of our nature’s resources are matters that concern politicians, scientists and technocrats. At best, perhaps, they are the preoccupation of interest groups or naturalists.

So the preoccupation of the Orthodox Church and, in particular, her highest administrative authority, the Ecumenical Patriarchate, with the environmental crisis will probably come as a surprise to many people. Yet, there are no two ways of looking at either the world or God. There we cannot have a double vision or binary worldview. There can be no distinction between concern for human welfare and concern for ecological preservation.

In the late 3rd century, St. Anthony of Egypt (251-356), the “father of monasticism,” described nature as a book that teaches us about the beauty of God’s creation: “My book is the nature of creation; there, I read the works of God.” The spiritual collection known as The Philokalia records St. Anthony saying: “Creation declares in a loud voice its Maker and master.” This is how the Orthodox Church perceives the natural environment. There is, as St. Maximus the Confessor claimed in the 7th century, a sacramental dimension to creation. The whole world is a “cosmic liturgy.” St. Maximus adds: “Creation is a sacred book, whose letters are the universal details of creation.” What, then, is the Orthodox vision of the world?

As a young child, accompanying the priest of our local village to remote chapels on our native island of Imvros in Turkey, the connection of the beautiful mountainside to the splendor of liturgy was abundantly clear. This is because the natural environment provides a panoramic vision of the world. Nature’s beauty leads to a broader view of life and creation. It resembles the wide-angle lens of a camera, which prevents us from using or abusing the natural resources of our planet in a narrow-minded or selfish manner.

In the Orthodox Church, this broader vision is defined by the “eucharistic” and “ascetic” dimensions of life. These two fundamental concepts – “eucharist” and “ascesis” – are profoundly theological and spiritual in nature. The implications of the first term are easily appreciated. The word comes from the Greek word eucharistia, or “thanksgiving,” the same term used to describe the sacrament of the Divine Liturgy. In calling for a “eucharistic spirit,” the Orthodox Church reminds us that the created world should not be treated as our private possession or property, but rather received as a precious treasure or divine gift. The proper response, upon receiving this gift, is to accept and respect it with gratitude and thanksgiving.

The second term that defines our response to God’s generosity is “ascesis,” which derives from the Greek word askeo and and describes the way we treat the gift of creation. The world’s resources are offered to us by God not only to satisfy our needs but also to be shared with fairness. They are not ours to abuse or waste simply because we have the desire to consume them or the ability to pay for them. The ascetic dimension of life implies a vocation to respect and protect creation through self-restraint and self-control, as well as through frugality and simplicity. In this way, everything is restored to its original vision and purpose, as God intended it from the moment of creation.

Love for the Whole of Creation

On the sixth day of creation, God fashioned humankind in His image and likeness. (Gen. 1.26) However, most people tend to forget that numerous “living creatures of every kind, cattle and creeping things and wild animals of the earth of every kind” (Gen. 1.24), were also created on that day. This close connection between humanity and the rest of creation is a powerful reminder of the intimate relationship that we share as human beings with the rest of creation. There is more that unites us with the earth than separates us from it. This is a lesson of which science and ecology have reminded us in recent decades.

The saints of the early Eastern Church understood this lesson very well. They knew that a person with a pure heart was able to sense the connection with the rest of creation, especially the animal world. And this reality has parallels in both Eastern and Western Christianity. Think about St. Francis of Assisi talking to the sun and the moon, St. Seraphim of Sarov feeding the bear in the forest. This connection with the rest of creation is not merely emotional; it is profoundly spiritual. It is the same recognition expressed by St. Paul in his Letter to the Colossians, when he spoke of all things being created in Christ. (Col. 1.15-17) This is why Abba Isaac of Nineveh can write in the seventh-century desert of Syria:

What is a merciful heart? It is a heart, which is burning with love for the whole of creation: for human beings, for birds, for beasts, for demons – for all of God’s creatures. When such persons recall or regard these creatures, their eyes are filled with tears. An overwhelming compassion makes their heart grow small and weak, and they cannot endure to hear or see any kind of suffering, even the smallest pain, inflicted upon any creature.

Interpreting the Concept of Sin

Now, if all of creation is sacred, then our relationship with the environment is mystical or sacramental. In fact, the “sin of Adam” is precisely his refusal to perceive and receive the world as a gift of encounter and communion with God and with the rest of creation. This is why, in his Letter to the Romans, St. Paul emphasizes the consequences of sin, stating that “from the beginning till now, the entire creation has been groaning in pain” (Rom. 8.22), but now “awaits with eager longing this revelation by the children of God.” (Rom. 8.19)

Dear friends, the environmental crisis that we face reminds us of the cosmic consequences of sin, which are more than just social or spiritual. Indeed, every act of ecological pollution or destruction is an offence against God. Unfortunately, as human beings, we are responsible for creation; but we have behaved as if we own creation. Creation care is not primarily an ethical or moral issue. It demands a radical change of worldview and lifestyle. We are called literally to repent for the way we regard and treat God’s creation.

Therefore, the traditional concept of sin must be broadened to include environmental abuse! This is why, almost twenty years ago, we declared:

To commit a crime against the natural world is a sin. For human beings to cause species to become extinct and destroy the biological diversity of God’s creation; . . . to degrade the integrity of the earth by causing climate change; . . . to strip the earth of its natural forests, or destroy its wetlands; . . . to contaminate the earth’s waters, its land, its air, and its life – all of these are sins.

At the same time, natural creation is inseparable from the identity and destiny of humanity. Human attitudes and actions toward creation directly reflect human attitudes and behavior toward other people. Ecology is inevitably related in both its etymology and meaning to economy; our global economy is simply outgrowing the capacity of our planet to support it. Moreover, scientists estimate that those most hurt by global warming in the future will be those who can least afford it. Thus, pollution is intimately connected to poverty. Creation care is inevitably related to the Parable of the Last Judgment, where the Lord says: “I was hungry and you gave me food; I was thirsty and you gave me something to drink” (Matt. 25.35).

Concern, then, for the environment is directly related to concern for social justice, and particularly of world hunger. And a Church that does not pray and act for a polluted world is a Church that refuses to offer food and drink to a suffering humanity. This planet is indeed our home; but it is also the home of every human being, of every animal creature, and of every form of life created by God. We are not alone in this world; and our generation is not the only one that needs to survive on this planet.

We have often said that the crisis that we are facing is not primarily ecological. It is a crisis concerning the way we regard and respect the world. We treat our planet in a godless way precisely because we fail to see it as a gift from the Creator. It is our obligation to accept, sustain and convey this gift to future generations.

Nevertheless, almost exactly two months ago, the Intergovernmental Panel on Climate Change met here in South Korea and issued a report that calculates the catastrophic damage and immense cost of climate change, encouraging greater restraint in energy waste than we ever imagined. Therefore, before we can effectively deal with problems of our environment, we must change the way we see the world. We require a new worldview if we truly desire “a new earth.” (Rev. 21.1)

So let us acquire a “eucharistic spirit” and an “ascetic ethos” in our approach to creation care. Let us regard ourselves as responsible for every living creature of God. On September 1, 2017, the world day for protection of the natural environment, we issued a common statement with Pope Francis, proclaiming that:

Dear friends, the beautiful forests, the rocky seacoasts, and wonderful mountains of your country belong not only to the present generation but also to future generations. This is why the Korean people have acquired a unique reputation for reducing and recycling waste as well as respecting and protecting the natural environment. After all, humankind is entitled to something better than what we see around us. Future generations are entitled to a better and brighter world – a world free from degradation and violence, a world of generosity and compassion. It is this selfless and sacrificial love for our children that will show us the path that we must follow into the future.