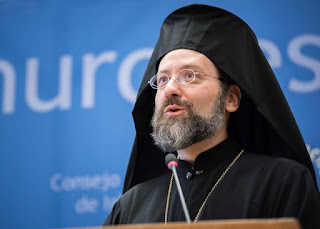 The pandemic of coronavirus that has shaken the world for the last nine months has revealed different forms of fanaticism. First of all, it has revealed coronavirus sceptics. Often referring to all sorts of conspiracy theories, they generally reject the discourse of science. Referring to human rights, their attitude is rather individual than collective, since they think more about their selfish freedom than the wellbeing of the society. They reject the health restrictions imposed by the civil authorities in order to protect the population, such as wearing mandatory face coverings, and they contest the need of mass vaccinations. In different parts of the world, we have seen during the past months several public demonstrations held by such coronavirus sceptics.

Some coronavirus sceptics have a rather magic approach, considering that their status, or their faith, is not concerned by the virus. This has been noticed within different world religions. Thus, coronavirus skepticism is often linked with religious fanaticism. Such fundamentalists consider that their place of worship is somehow miraculously protected from the virus, and therefore not concerned by the health restrictions imposed by the civil authorities, which they therefore ignore. They criticize the intervention of State in their religious worship, even though this is done for the common good. Unfortunately, the coronavirus is not stopped by religious convictions, and thus, we have witnessed some synagogues, mosques, temples, churches and monasteries around the world becoming clusters of propagation of the disease, thus fostering illness and even death of numerous people within the society at large. In these cases, religion has been pointed out by some other fanatics as being a threat for society.

Meanwhile, in France, while a trial is taking place over the January 2015 Islamist attack against the French satirical weekly newspaper Charlie Hebdo that had published in the past provocative cartoons of prophet Mohammad, a man has injured two people in Paris on 25 September 2020, targeting the former offices of the magazine that had recently reprinted the old cartoons. Of course, the reprint of these drawings could be seen as a lack of respect and even blasphemous to some people, and definitely reflects a bad timing. This reveals once again a confrontation between those who claim for an extreme freedom of speech and those who accuse their rivals of blasphemy. Thus, a conflict appears between two forms of fanaticism: between a secular and a religious one, which only cultivates hatred between people and which is responsible for the tragic death of innocents.

As we can see, the pandemic of coronavirus has pointed out that the world is still not freed from fanaticism. The Swiss psychiatrist and psychoanalyst Carl Gustav Jung (1875-1961) used to say that “fanaticism is the always present brother of doubt”. According to him, “fanaticism is only found in those who have to suppress secret doubts”, and for this reason he even considered that “converts are always the worse fanatics”. The Holy and Great Council of the Orthodox Church (Crete, 2016) has warned us of the dangers of religious fundamentalism: “The explosions of fundamentalism within religious communities threaten to create the view that fundamentalism belongs to the essence of the phenomenon of religion. The truth, however, is that fundamentalism, as “zeal not based on knowledge” (Rom 10.2), constitutes an expression of morbid religiosity” (Encyclical, 17).

A better world is expecting from us collaboration instead of confrontation, dialogue instead of ideology. Religion and science have to work hand in hand for the well-being of humanity. Religions and States have to collaborate for justice, peace and health of human beings. Any form of fanaticism, whether religious or secular, has to be eradicated through education and dialogue, in order to build the world of after. The coronavirus crisis is a given opportunity to overcome our individualism and selfishness by cultivating altruism and sharing. This should be an occasion to think of the other, to care about the wellbeing of one’s neighbor, to share with those in need, to help those in danger, to protect and defend the vulnerable.

As the Encyclical of The Holy and Great Council of the Orthodox Church highlighted: “A true Christian, following the example of the crucified Lord, sacrifices himself and does not sacrifice others, and for this reason is the most stringent critic of fundamentalism of whatever provenance. Honest interfaith dialogue contributes to the development of mutual trust and to the promotion of peace and reconciliation” (Encyclical, 17). The pandemic has revealed that the world is in great need of a sense of humanity.