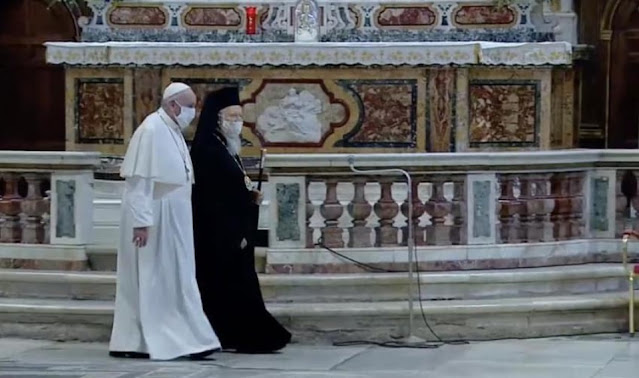 On 3 October 2020, on the eve of the feast of the Saint Francis, at the tomb of the saint in Assisi, His Holiness Pope Francis issued a very powerful and timely encyclical entitled “Fratelli tutti”, addressing the issue of universal fraternity and cooperation at the time of a disastrous pandemic, afflicting people not only by the staggering number of deaths and economic consequences, but surrounded, sadly, by the rise of racism, nationalism and religious fundamentalism. Its title repeats the words through which Saint Francis of Assisi addressed his brothers and sisters while proposing to them a way of life according to the Gospel. Pope Francis recalls that it was the visit of the saint to Egypt, where he met Sultan Malik-el-Kamil in the year 1219, during the time of the Crusades, that revealed the love of the saint for every human being, whom he considered as his brothers and sisters.

The Pope underlines that while his previous encyclical “Laudato Si” was inspired by “his brother Bartholomew”, the “Green” Ecumenical Patriarch, the present one was inspired by the Grand Imam Ahmad Al-Tayyeb, whom he met in Abu Dhabi, where both religious leaders declared that “God has created all human beings equal in rights, duties and dignity, and has called them to live together as brothers and sisters”.

His Holiness also explains that the encyclical was written in the context of the present Covid-19 pandemic which unfortunately has shown that the countries of the world were not ready to work together for the common good. In fact, the Pope considers that certain trends in our world actually hinder the development of universal fraternity. If one could have hoped that the world would have learned a lesson from the wars and disasters of the past, one can witness signs of a certain regression. Francis notes that new conflicts are appearing and that a new form of myopic, extremist, resentful and aggressive nationalism is arising, while hyperbole, extremism and polarization have become political tools in many countries of the world.

Pope Francis reminds us that the present Covid-19 pandemic has particularly impacted the elderly who found themselves abandoned, isolated from their family members and died in an tragic way, due mostly to the lack of respirators and the dismantling of healthcare systems. According to him, the Covid-19 pandemic calls the entire world to realize that we are a global community, that we are all in the same boat, and that one’s personal problems are the problems of all. According to him, the unforeseen blow of the pandemic urges us to recover our concern for human beings, for everyone, rather than for the benefit of a few, since the notion of “every man for himself” could rapidly degenerate into a free-for-all that would prove worse than any pandemic.

Therefore, His Holiness calls humanity to a new style of life, through rediscovering the need of one another. He considers that the world cannot continue to discard others due to an obsession of reducing labor costs. He notes that although some economic rules have proved effective for economic growth, they were not for integral human development.

He argues that one cannot claim that the modern world has reduced poverty by measuring poverty with criteria from the past that do not correspond to present-day realities.

Pope Francis also notices that unfortunately, in practice, human rights are not equal for all. War, terrorist attacks, racial or religious persecution, and many other affronts to human dignity are actually judged differently, depending on how convenient it proves for certain, primarily economic, interests. Migrants are not seen as possessing the same dignity as any human being and therefore not entitled to participate in the life of society like others. He underlines Christians cannot accept such a way of thinking and acting, since the Christian faith promotes the inalienable dignity of each human person regardless of origin, race or religion, as well as the supreme law of fraternal love. He also points out that the progress of technology has shown that we are not free from ideologies and that it could serve digital campaigns of hatred and destruction, and could create, disguise and alter anything. And he recognizes that destructive forms of fanaticism could be found even among religious believers, including Christians.

But at the same time, the Covid-19 pandemic enabled society to recognize and appreciate all those who sacrificed their lives for others, such as the medical teams, storekeepers, caretakers, all those who provide essential services and public safety, volunteers, as well as religious, who understand and show that no one is saved alone. Pope Francis takes the story of the Good Samaritan as a paradigm, underlining that it is constantly being repeated. He considers that this parable encourages humanity to persevere in love, to restore dignity to the suffering and to build a worthy society, and affirms that Christians are called to recognize Christ in each of our abandoned or excluded brothers and sisters.

The teaching of Christ calls for a love capable of transcending borders and which can be called “social friendship”. Social friendship and universal fraternity necessarily call for an acknowledgement of the worth of every human person, always and everywhere. Pope Francis underlines that the notion of human person is by nature relational. We are all called as human beings to transcend ourselves through an encounter with others. For this reason, solidarity is a concrete expression of service, of care for others. He reminds us that the world exists for everyone, because everyone is born with the same human dignity, and that differences of color, religion, origin, nationality cannot be used to justify the privileges of some over the rights of all. He also stresses that mutual assistance between countries proves enriching for each and that the true worth of the different countries is measured by their ability to think not simply as a country but also as part of the larger human family.

His Holiness considers that the pandemic reminded us that we need to have a global outlook to save ourselves from provincialism. He insists that the development of a global community of fraternity based on the practice of social friendship on the part of peoples and nations calls for a better kind of politics, one truly at the service of the common good. He points out at education which is essential for quality human relationships and for enabling society itself to react against injustices, aberrations and abuses of economic, technological, political and media power.

According to him, recognizing that all people are our brothers and sisters, and seeking forms of social friendship that include everyone, is not merely utopian. It demands a decisive commitment to devising effective means to this end. Any effort along these lines becomes a noble exercise of charity. Politics too must make room for a tender love of others. And he affirms that if we want to encounter and help one another, we need an authentic social dialogue which involves the ability to respect the other’s point of view and to admit that it may include legitimate convictions and concerns. He stresses that every war leaves the world worse than it was before. According to him, war is a failure of politics and of humanity.

The Pope reminds us that in many parts of the world, there is a need for peace and reconciliation, that there is also a need for peacemakers, prepared to initiate processes of healing and renewed encounter. He underlines that forgiveness and reconciliation are central themes in Christianity as well as in other religions. In his eyes, the different religions, based on their respect for each human person as a creature called to be a child of God, contribute significantly to building fraternity and defending justice in society. In the face of actions that can never be tolerated, justified or excused, forgiveness is always possible. Although forgiving does not mean forgetting, in the face of something that cannot be forgotten, forgiveness is nevertheless possible.

Pope Francis’ encyclical “Fratelli tutti” was issued at a very crucial moment of history of humanity. May his appeal for peace, justice and fraternity inspired particularly by Saint Francis of Assisi enable us to realize that we are all brothers and stimulate us to act accordingly, in order that the world of after the pandemic would be a better one, modeled by human solidarity.