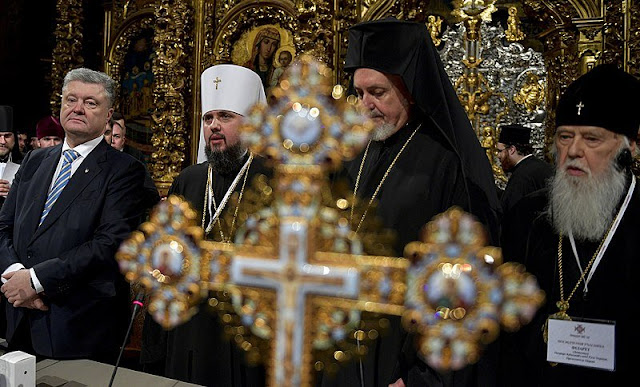 Since Russia launched a military invasion into Ukraine on Feb. 24, headlines around the world have focused on the atrocities of the war and its negative effects on international relations. However, decades-long theological conflict behind the war has been underreported.

In the last couple years, Ukraine has been in the center of the Orthodox schism between the Ecumenical Patriarchate and the Moscow Patriarchate over “autocephaly,” or independence, of the Orthodox Church of Ukraine. Many Orthodox theologians argue that the war in Ukraine will determine the future of the OCU. Archimandrite Cyril Hovorun is one of them.

ReligionUnplugged.com interviewed the former first deputy chairman of the Educational Committee of the Russian Orthodox Church to further understand the ultimate goals of the Russian Orthodox Church. Hovorun is a professor in Ecclesiology, International Relations and Ecumenism at the University College Stockholm (Enskilda Högskolan Stockholm). A graduate of the Theological Academy in Kyiv and National University in Athens, he completed his doctoral studies at Durham University. He was a chairman of the Department for External Church Relations of the Ukrainian Orthodox Church. Hovorun held numerous fellowships and visiting teaching positions at Yale, Columbia, the University of Münster in Germany and Chester Ronning Center for the Study of Religion and Public Life at the University of Alberta in Canada. Last but not least, he served as a director of the Huffington Ecumenical Institute at Loyola Marymount University and assistant professor at the same university.

JT: For years, Patriarch Kirill of Moscow has been accusing the Ecumenical Patriarch Bartholomew of creating Orthodox schism. He mentioned that Orthodoxy will be divided into two camps: Greek and Slavic. Could you explain to our non-Orthodox readers what he meant by that?

CH: These accusations go in line with the usual rhetoric of the Russian propaganda: to accuse others of what the Russians do themselves. For example, they have invaded Ukraine in order to “save it from Nazism.” In fact, the ideology that underpins this invasion is not far from the totalitarian ideologies that had led to WWII. The same is with the schism: the Russian church tries to create one by unilaterally cutting relations with other local churches. The Ecumenical Patriarchate, in contrast, struggles to preserve and enhance relations with all churches, including the Moscow Patriarchate.

CH: No, I don’t believe that only the Greek churches want to recognize the Ukrainian autocephaly. Most other churches intend to do the same when the Russian pressure on them will weaken. The Moscow Patriarchate tries to prevent the Orthodox churches from recognizing the Orthodox Church of Ukraine by both sticks and carrots. The Greek churches have recognized this church not because they are Greek but because they are freer and bolder.

JT: How would you describe the Orthodox Church of Ukraine? Do you think that the OCU’s membership is growing or not? What is the role of the Orthodox Church of Ukraine in building the national identity of Ukrainian people? Does the leadership of the OCU feel isolated since they are not recognized by all Orthodox churches? What is the perception of the OCU among churches that did not recognize its autocephaly?

CH: Since the war started, the number of communities switching from the Moscow Patriarchate to the OCU has dramatically increased. An increasing number of people in Ukraine associate the war with the Moscow Patriarchate. The OCU, in contrast, is associated not only with nation building but also with the national resistance. This makes sympathy to this church, growing not only among the Ukrainian faithful but also among the members of other churches. I don’t think the OCU feels isolated. On the contrary, it feels the growing solidarity from the Christian churches worldwide.

JT: How strong or important is the OCU’s diaspora network of churches outside Ukraine?

CH: The OCU does not have a diaspora outside Ukraine. However, the Ukrainians who live abroad and belong to other jurisdictions, primarily the Ecumenical Patriarchate, unanimously support Ukraine and its independent church.

JT: Many Orthodox journalists are perceiving Moscow’s military intervention in Ukraine as a path to destroy Orthodox Church unity. How will the war in Ukraine affect inter-Orthodox relations? Will this conflict deepen division among Moscow and Constantinople and accelerate the Orthodox schism?

CH: The war has been underpinned by the quasi-religious ideology of the Russian world. This ideology, I believe, has contributed significantly to weakening the pan-Orthodox unity. To restore such a unity, in my opinion, the Orthodox churches must condemn the ideology of the Russian world. Such a condemnation would be an update of the famous condemnation of “phyletism” (nationalism applied to ecclesiastical affairs) at the council of Constantinople in 1872.

JT: Some historians and advocates for progressive Christianity, such as Dr. Diana Butler Bass, argue that Russia’s military intervention in Ukraine has a crusader element. As an academic whose research focus covers both international relations and ecclesiology, do you think that this is a valid argument or exaggerated opinion?

CH: Yes, I would agree with such judgment. Russia has effectively launched a crusade against what its propaganda presents as the “godless West.” For the Russians, Kyiv is the “second Jerusalem” captured by “infidel Westerners.” Now they try to regain what they call the cradle of their civilization. The irony, however, is that they destroy this cradle by bombing it.

JT: In December of 2021, the Moscow Patriarchate established a Patriarchal Exarchate in Africa, following the decision by Patriarch Theodore II of Alexandria to recognize the Orthodox Church of Ukraine. Approximately 102 clerics of the Orthodox Church of Alexandria from eight African countries have successfully transferred to the Russian Orthodox Church, which speaks volumes about the influence the Russian Orthodox Church has globally. Just recently, the Moscow Patriarchate has been talking about establishing an exarchate in Turkey directly undermining the Ecumenical Patriarchate and deepening schism. What do you think is the end goal of Patriarch Kirill? Does he plan to overthrow the position “first among equals” held by the ecumenical patriarch? Does he want to restore Moscow’s reputation as the “Third Rome” in the Orthodox world?

CH: The Moscow Patriarchate claims that its main concern is to preserve the church canons and retaliate (against) those churches that supposedly violate them. In fact, however, the ROC brutally violates these canons itself. Canons are not the reason but an excuse for this church to expand in Africa and elsewhere. The reason for the expansion is mostly political — to imitate Putin’s attempt at building a new empire.

JT: Early on in the conflict, Moscow Patriarch Kirill addressed the Russian faithful appealing to all parties involved in the conflict “to avoid civilian casualties.” It seems that many theologians, politicians and journalists in the West perceived that public statement as disingenuous. This address was followed by a statement that Putin's opponents in Ukraine are “evil forces.” What is your perception of Patriarch Kirill’s statements? Why did Patriarch Kirill all of the sudden change his mind? Do you think that the Russian Orthodox Church took an active role in the process of ending the conflict and establishing peace or with the last statement it is adding fuel to the fire?

CH: Unfortunately, Patriarch Kirill has not changed his mind. The only time when he implied some doubts regarding the oppressive measures of the Russian regime was during the protests following the parliamentary elections in Russia in December 2011. He then publicly agreed that the protests can be justifiable. Since then, he has always approved the Kremlin’s aggression, either against its own people or abroad. I believe that those who read his messages as endorsing the Russian war are right.

JT: In the aftermath of Russia's invasion, what do you think is the future of the Orthodox Church of Ukraine? The Kremlin announced that Putin is ready to negotiate a deal over Ukraine's neutrality and demilitarization. Can we expect church+related issues to be present during the negotiating process? Is it right to think that in the near future, the OCU will be returned to ecclesiastical jurisdiction of the Moscow Patriarchate?

CH: The future of Ukrainian Orthodoxy will depend on the future of the country and whether it survives as an independent democracy. I personally firmly believe that we will survive and win. In such a case, the Orthodox will have a second chance for reunification after 2018. I think a new unifying council would be possible — like the one in December 2018. At this council, the OCU and part of the Moscow Patriarchate in Ukraine may come along. They are already getting closer to each other.

Jovan Tripkovic is a graduate student and teaching assistant at the University of Wyoming.