IN MEMORIAM METROPOLITAN GENNADIOS OF SASSIMA 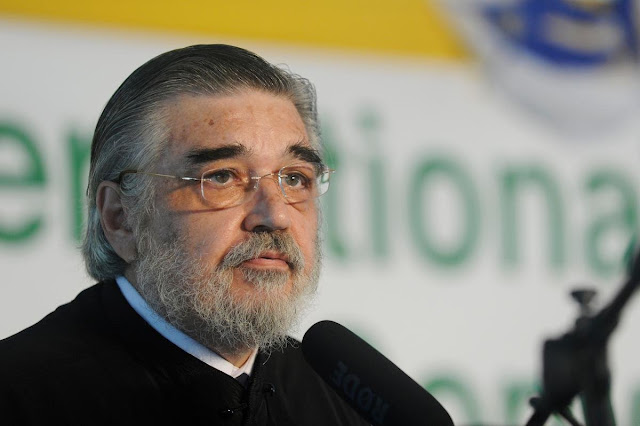 Tribute of the World Council of Churches at his funeral at the Holy Hermitage of Timios Prodromos of Akritochori, Greece, 3 June 2022. 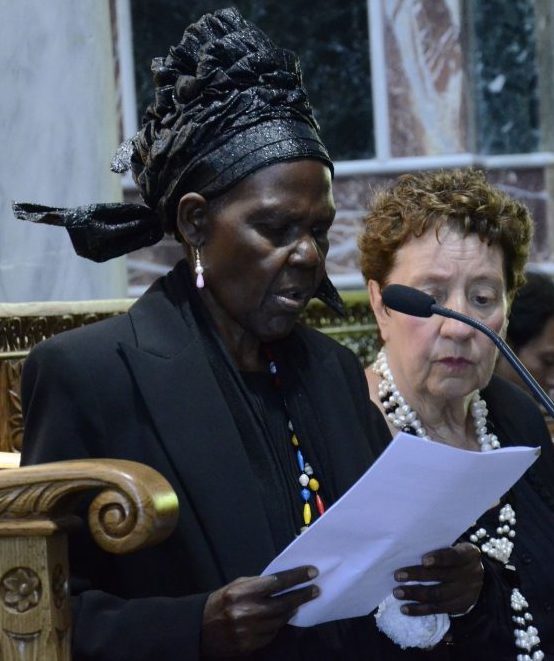 We mourn today, together with his Church, the Ecumenical Patriarchate, his many friends around the world, and his family, Metropolitan Gennadios of Sassima, an eminent hierarch of the Orthodox Church, a profound and creative theologian, a sensitive pastor, a professor, a leader in the ecumenical movement, respected and known worldwide.

The World Council of Churches is deeply indebted to Metropolitan Gennadios and gives thanks to God for his contribution over many years to its life and work. He has served on the staff of the Faith and Order Secretariat and as vice-moderator of the WCC Faith and Order Commission since 2015; he was a member of the WCC’s central and executive committees; and he was twice elected vice-moderator of the central committee. His contribution to the Special Commission on Orthodox Participation in the WCC will be remembered with gratitude.

He played a leading role in shaping the vision of WCC assemblies as moderator of the assembly worship planning committee, as moderator of the assembly planning committee, and as one of the chairs of the 2013 assembly in Busan. This is part of his substantial ecumenical legacy. His tireless efforts to keep the Eastern and Oriental Orthodox Churches together within the fellowship of the WCC, organizing opportunities for encounter and meetings, allowing them to meet together, to reflect together, and to speak together with one voice was yet another valuable contribution to the WCC and the ecumenical movement.

The ecumenical contribution of Metropolitan Gennadios is not limited to his active participation and leading role in the WCC. He served faithfully in the area of bilateral theological dialogues, with significant positions in the international theological dialogues of the Orthodox Church with the Roman Catholic Church, the Lutheran World Federation, and other Christian World Communions.

In all his positions of responsibility, he truthfully and generously shared his Orthodox theological, liturgical, and spiritual riches, while listening carefully to his partners and trying always to dialogue with them in truth and in love.

A prolific writer, and author of many books and articles, an editor and co-editor of several books about issues that are on the agenda of the ecumenical movement, Metropolitan Gennadios was widely known, respected, and valued in academic, theological, and ecumenical circles.

He was for many of us in the World Council of Churches a devoted friend and colleague. He was trusted and respected by those he has worked with.

He will be remembered for his kindness and openness, for his readiness to serve whatever the circumstances, and for his creative responses and solutions at truly difficult moments in the life of the WCC. With his personality that combined authority and human warmth, determination and humor, he was a bridge-builder between Orthodox and other member churches of the WCC, and between the fellowship of member churches and other ecumenical partners.

He will be missed by the World Council of Churches, as well as by his Church and the wider ecumenical family.

“Within Your peace, O Lord, where all Your saints repose, give rest also to the soul of Your servant Metropolitan Gennadios, for You alone are immortal” (Prayer from the Orthodox Tradition for the departed). May his memory be eternal!

For my dear brother in Christ

By Metropolitan Vasilios of Constantia and Ammochostos

On behalf of His Beatitude the Archbishop of Cyprus Chrysostomos and the Theological School of the Church of Cyprus, we lay wreaths as an expression of gratitude to our late brother in Christ Metropolitan Gennadios. We wish that these may symbolize the crown that our Triune God will offer to our brother and make him from now on a minister in the heavenly altar.

The Church of Cyprus has also a special reason to express gratitude to our late brother Metropolitan Gennadios of Sassima. During his forty years of ministry, which was entrusted to him by the Ecumenical Patriarchate, either in the World Council of Churches or in the dialogues in which he always participated, he respected and supported the Church of Cyprus. For this reason, since the establishment of the Theological School, the Church of Cyprus honored him and assigned him the teaching of Canon Law.

Of course, I also express my own personal feelings of grief and pain for the loss of my brother Gennadios. I would like to say that we have known each other since my presence at the Orthodox Center of the Ecumenical Patriarchate in Geneva, when he first came to the World Council of Churches, in the “Faith and Order” Commission. Since then, our brotherly friendship has never ceased and we carried on working together serving Orthodox theology, and Orthodox tradition. For this reason, we are grateful, because the late Metropolitan Gennadios, through this activity, became a leading figure not only for us Orthodox but for all who participate in the World Council of Churches, as he was appointed in the distinct position of the Vice Moderator of the Central Committee of the World Council of Churches, always representing the Ecumenical Patriarchate. We express our grief for his loss, wishing that our Lord grant him eternal rest where the righteous repose and place him among the Saints. Amen.

— Metropolitan of Constantia and Ammochostos Vasilios represents the Church of Cyprus to the Central Committee of WCC. From Porto Alegre (2006) until Busan Assembly (2013) he was also Moderator of Faith and Order. He is also a member of the International Commission for the Dialogue between Orthodox Church and the Roman Catholic Church. He teaches dogmatic theology at the Theological Faculty of the Church of Cyprus.

After all the important things we have heard in the previous speeches and especially by the Moderator of the Central Committee of the World Council of Churches, Dr Agnes Abuom, I would like to add a few words from my heart for my dear friend, late Metropolitan Gennadios of Sassima, whom I had the privilege to know since school years.

Together with my sister Eugenia and our parents we were related to Gennadios, his brother Apostolos and all his family for the last sixty years or so. We were friends from childhood, our fathers were colleagues in the army and our families had good friendly relations. With a difference of a few years, we studied together, from the tutoring classes for the exams at the university and later in postgraduate studies in Paris. Metropolitan Gennadios had special spiritual gifts. However, the most special gift in his life was the honor and trust he was bestowed by the Ecumenical Patriarchate, by appointing him as its representative in the ecumenical movement and in numerous bilateral dialogues.

Moderator Dr Agnes Abuom has previously described his valuable contribution in the ecumenical movement for the last forty years. What remains is to add a short reference for him, who was truly a great and ecumenical Hierarch. He followed a very painstaking course in learning. He was very well educated. He came from a military family, like ours, who never had much money, as we grew up in the “shining poverty” of the military officers of that time, which was accompanied by respect, dignity, and commitment to education and learning. Our parents inspired us with a love for learning and offered us very good education opportunities with schools, foreign languages, teachers, and studies. For this reason, Gennadios and his brother Apostolos, a prominent vascular surgeon, were very well educated with a lot of effort and diligence.

The hierarch studied theology, he did his undergraduate, postgraduate and doctoral studies in prominent educational institutions abroad, and he received respecting degrees and diplomas, he learned many foreign languages and music. When the Ecumenical Patriarchate, with the actions of Metropolitan Chrysostom of Ephesus, entrusted him as a representative in the demanding theological committee of the WCC, “Faith and Order”, he devoted himself in an in-depth study of the history of the ecumenical movement and relevant theological texts. At the same time, he read Orthodox theology as it developed in the context of the Pan-Orthodox and Pre-Counciliar Conferences, on the way to the Holy and Great Council of the Orthodox Church. He, therefore, had a deep knowledge of the texts and initiatives of the Ecumenical Patriarchate for an active presence of the Orthodox Church in the ecumenical movement, for opening to the other Christian traditions, and, above all, for the common witness of all local Orthodox Churches when meeting with other Christian traditions and the modern world. For this reason, his special characteristic was that he was an ecumenical Orthodox hierarch, who represented the Ecumenical Patriarchate in its ecumenicity. He knew all the participants in the dialogue, all the currents in the Protestant world, old and new, the Anglicans, and the theological positions of the Roman Catholics and thus he was able to develop a creative dialogue whenever he participated in dialogues, on behalf of the Patriarchate and Orthodoxy in general.

It was mentioned that he didn’t betray the Orthodox faith. Allow me to add that no one in 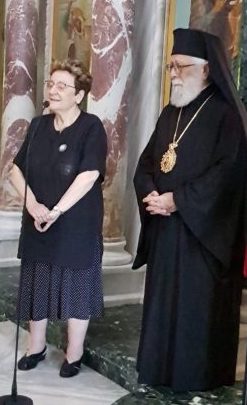 the dialogue betrays the faith, but when a theologian is representing the Orthodox Church, this is a matter of credibility, when that person is not well-prepared, does not know, does not respect, and does not carefully hear all the participants in the dialogue. However, Metropolitan Gennadios studied carefully and knew very well the theological traditions of the other participants, he was noble and approachable and, for this reason, he was appreciable and respectable. Those of us who knew and lived close to him for many decades can assure you of this. No one, therefore, betrays when meets these conditions.

Today’s funeral service of Metropolitan Gennadios of Sassima sends a message with a fervent wish: the Ecumenical Patriarchate always needs those that are most worthy, it needs well-educated people, who speak foreign languages, with prudence, knowledge, and, above all, with clear faith, so that the light of Orthodoxy will be reflected in the eyes of our dialogue partners. May our Lord, with the prayers of His All-Holiness Ecumenical Patriarch Bartholomew, bring forth new worthy successors of Orthodox witness following our beloved Metropolitan Gennadios. May his memory be eternal!

— Dr. Dimitra Koukoura is Professor of Homiletics at the Faculty of Theology of Aristotle University of Thessaloniki (Greece). She has been actively involved in the Ecumenical Movement and especially the WCC. She is a former member of the Commission on Faith and Order and acting member of the Central Committee of the WCC.