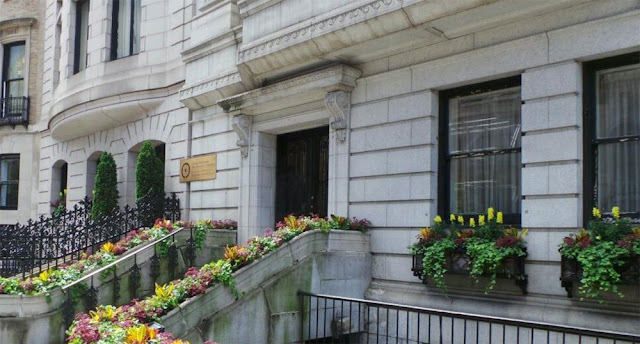 COMMUNIQUE OF THE HOLY EPARCHIAL SYNOD

NEW YORK: On Monday, October 12, 2020, His Eminence Archbishop Elpidophoros of America convened the Holy Eparchial Synod via videoconference for an extraordinary session to consider the current issues concerning the life of the Church.

Significant decisions were made, such as:

a)    The expression of gratitude to His All Holiness the Ecumenical Patriarch Bartholomew and the Holy and Sacred Synod of the venerable center of Orthodoxy for the opportunity provided to the Archdiocese of America to draft a new Charter. This distinguished prospect is made even more profound in light of the celebration in the year 2022 of the first centennial since the inception of the Archdiocese. The compilation of the new Charter, with the collaboration of the Hierarchy, the clergy and the laity of the Church, will inaugurate the new centennial of Archdiocesan ministry, and for this reason two Committees will be commissioned with this great and sacred task: 1) An extensive committee in America, composed of representatives of the Holy Eparchial Synod, the clergy and the laity and 2) a second committee, assigned to participate in the Joint Committee that will be devised by our Mother Church, in order to convey and communicate the essence and the ideas of the former committee.

b)    The validation of the Press Release of the Holy Archdiocese regarding the uninterrupted authority and continuous operation of all the Archdiocesan administrative bodies until the ratification and publication of the new Charter by the Patriarchate such as the Holy Eparchial Synod, the Archdiocesan Council, the Executive Committee, the Clergy Laity Congress and the respective administrative bodies of the Metropolises.

c)     The dedication of upcoming meetings of the Archdiocesan Council to the formulation of the vision for the new Charter.

d)    To ensure a dignified life with sufficient earnings, befitting to his hierarchal distinction and to the tradition of the Church, for His Eminence the Metropolitan Evangelos of Sardes, who has served the Archdiocese for many decades.

Lastly, the Archbishop announced the a) composition of the Executive Committee and the National Board of the National Philoptochos Society, b) the appointment of the V. Rev. Archimandrite Constantine Moralis as the Chancellor of the Holy Metropolis of New Jersey and the appointment of the Metropolitan Council of the aforementioned Metropolis and c) the dates for the ordinations to the Sacred Hierarchy of the Bishops-elect: His Grace Spyridon (Kezios) of Amastris on November 14th, His Grace Timothy (Bakakos) of Hexamilion on December 5th and His Grace Ioannis (Constantine) of Phocaea on December 19th of this year.