TOWARDS A COMMON DATE OF EASTER: REMAINING FAITHFUL TO THE COUNCIL OF NICEA (325) 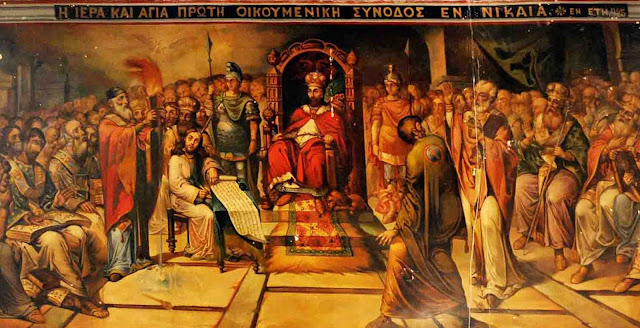 The year 2025 will mark the 1700th anniversary of the first ecumenical council, the council of Nicaea (325), which initiated a new chapter in the history of Christianity. On this occasion, the World Council of Churches is planning to organize a World Conference of the Faith and Order Commission in order to celebrate this anniversary and to reflect on the transmission of the apostolic faith today. The purpose of this conference will not be to study the history of the council nor to study its theology, but rather to reflect on what “visible unity” means today to different Christian Churches and how Christians can collectively promote, preach and live the apostolic faith today in the context of so many contemporary challenges, such as secularization and religious pluralism.

We often forget that the council of Nicaea did not only promulgate a Creed that ought to become universal, but also ensured a common celebration of Easter for the entire Christendom. In front of division caused by schisms and heresies, it was then necessary to ensure a common celebration of the Resurrection in order to manifest unity in faith. As we know, in the pre-Nicene period, there was no such common date, since some Christians celebrated Easter alongside with the Jewish Passover and others celebrated it on the following Sunday. The rule established at Nicaea was to observe Pascha on the first Sunday following the full moon after the spring equinox. Thus, the council referred to astronomic data – the equinox and the full moon – to determine the date, rather than to a specific calendar or a particular feast, such as the Jewish Passover.

Although Nicaea established this rule ensuring a common date of Easter for the entire Christendom, unfortunately, today, Christian Churches are divided with regards to the celebration of this great feast. The reason is that not everyone is using the same tools. Indeed, the Orthodox still use the Julian calendar, introduced by Julius Caesar in 46 BC, which is at the present moment thirteen days behind the astronomic reality, and they also use old lunation tables, leading to a belated date of Pascha, that may be one week or even one month after the Western date of Easter.

While being determined by the Julian calendar, the date of the spring equinox (March 21) corresponds to April 3 of the Gregorian calendar, which is used worldwide today. Therefore, if the full moon appears before this date, the Orthodox must wait for the following full moon, and in this case, there will be a difference of one month between the Western and Orthodox Easter, as it will be the case this year. According to the astronomic data, the Orthodox then celebrate Pascha on the Sunday following the second full moon of spring, which contradicts the principle of Nicaea. If the spring full moon appears after April 3, Christians are supposed to celebrate Easter on the same day, as it indeed happens on occasion. However, since the Orthodox use old lunation tables to determine the date of the full moon, which are a few days behind the current astronomical data, in some cases the Orthodox must wait for the subsequent Sunday to celebrate Pascha, and this explains that there may be a difference of one week between the Eastern and the Western date of Easter. But in that case, according to the astronomic data, the Orthodox celebrate Pascha on the second Sunday following the full moon of spring, which also contradicts the principle adopted at Nicaea.

For these reasons, the question of the revision of the calendar and the common date of Easter was raised in the Orthodox Church on several occasions during the 20th century: first by the patriarchal and synodical encyclical of Ecumenical Patriarch Joachim III addressed in 1902 to all the Primates of the Orthodox Autocephalous Churches[1], and once again by the encyclical of the Ecumenical Patriarchate issued in January 1920 addressed “unto the Churches of Christ everywhere” calling for the “the acceptance of a uniform calendar for the celebration of the great Christian feasts at the same time by all the Churches.”[2] The calendar reform was subsequently discussed at the Pan-Orthodox Congress of Constantinople of 1923, convened by Patriarch Meletios IV of Constantinople, which led to a partial revision of the calendar: facing the reluctance of some Orthodox to adopt the “Roman Catholic” Gregorian calendar, a Serbian astronomer, Milutin Milankovic, proposed a revised Julian calendar, which was actually more precise than the Gregorian one, and it was accepted by some local Orthodox Churches only for the feasts that are observed on the same fix date every year (such as Christmas), but not for the Paschal cycle.

The question of the calendar and the common date of Pascha was listed among the 17 topics to be examined by the future Holy and Great Council of the Orthodox Church by the inter-Orthodox preparatory committee which met in 1930 at the monastery of Vatopedi on Mount Athos. It was kept on the list of issues established by the first Pan-orthodox Conference in Rhodes in 1961 which launched the process of the preparation of the Holy and Great Council of the Orthodox Church and remained among the ten topics on the agenda determined at the first pre-conciliar pan-orthodox conference of Chambésy in 1976. In preparation towards the council, a specific congress of Orthodox astronomers met in Chambésy in June 1977 to prepare both a revised calendar, even more accurate than the Gregorian one, and review the lunation tables according to the most accurate astronomic data. Unfortunately, the Synaxis of the Primates of the Orthodox Churches held in Chambésy in January 2016, decided to exclude this question from the agenda of the council, fearing that a calendar reform would create a new schism within the Orthodox Church. Thus, no decision has been taken on the issue by the Orthodox to this day.

It is worth mentioning that in 1997, the World Council of Churches held a consultation in order to establish a common date for Easter and recommended maintaining the Nicene norms (that Easter should fall on the Sunday following the first full moon of spring), to calculate the astronomical data (the spring equinox and the full moon) by the most accurate possible scientific means, using as the basis for reckoning the meridian of Jerusalem, the place of Christ’s death and resurrection[3].

Perhaps, the celebration of the 1700th anniversary of the council of Nicaea in 2025 would be a good occasion to educate Christians on the necessity of a calendar reform and of a common date of Pascha in order to remain truly faithful to the decisions of the first ecumenical council. The fact that the Eastern and Western dates of Easter will coincide on that year should be taken as an encouragement towards that direction!