St. Nectarios of Pentapolis & Egypt. By Metropolitan Cleopas of Sweden 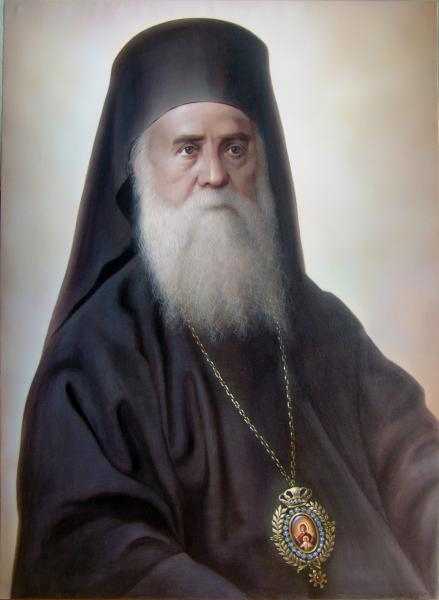 The unique virtues which St. Nectarios, Metropolitan of Pentapolis, was endowed with caused many people to openly show their respect for him and secretly look to him as a worthy successor to the very elderly Patriarch Sophronios. The desire of the Greek Orthodox faithful did not however, bode favorably in the hearts of those within the patriarchal sphere. On the contrary, it was rejected. This issue brought the beginning of a marked hostility which developed between those individuals surrounding the patriarch and the metropolitan of Pentapolis, who distinguished by his spirit of humility, viewed the patriarch with the utmost sense of gratitude. Wanting to halt the activity of the popular bishop, those in the patriarchal sphere spread rumors that St. Nectarios aspired to anticanonically ascend to the patriarchal throne of Alexandria while Patriarch Sophronios was still alive. It is rumored up until the present day that the cause of the formation this unjust misunderstanding of Metropolitan Nectarios was his affirmative answer when the guests at a banquet in his honor wished him, “May you go on to become patriarch.” The metropolitan of Pentapolis’ response of “thank you” was misconstrued by those of the patriarchal court, who for a long while, motivated by base incentives, wished to undermine the pastoral work of this hierarch by all means. The correspondence exchanged between clergymen of the Alexandrian climate during that era bears testimony to this fact. Through this correspondence we are informed of the hostility which was beginning to formulate, on one hand, and on the other hand, we can observe the role which these clerics played in the further progression of this problem.

The result of this unjust attack against the metropolitan of Pentapolis was that only sixteen months after his ordination as a bishop, specifically on May 3, 1890, he received the first patriarchal notification, according to which he was relieved of all his ecclesiastical duties. (Metr. T. Matthaiakis, O Agios Nektarios (St. Nectarios), pg. 46.)

The individuals of the patriarchal environment had succeeded in dealing a double blow to the bishop of Pentapolis. On the one hand, they succeeded in slandering the innocent hierarch, convincing Patriarch Sophronios that St. Nectarios was supposedly plotting to take his throne. On the other hand, they were able to stop his multifaceted pastoral and social activity, confining St. Nectarios to his chamber. Patriarch Sophronios was unable to perceive the true character of the individuals surrounding him, and not possessing the greater awareness to distinguish the exceptional nature of St. Nectarios, was misguided by their accusations. Without looking into the matter, he decided to render “him who was plotting his overthrow” powerless right from the beginning by notifying him of his dismissal from the positions he held.

The position adopted by the patriarch and those of his court became even more unyielding as time passed. According to accounts of family members of St. Nectarios, he asked that the patriarch grant him audience, that is, meet with him, but the patriarch refused him. (C. Cavarnos, St. Nectarios of Aegina, pgs. 18-19.)

The individuals surrounding the patriarch took advantage of his refusal to meet with St. Nectarios and convinced him to send a second patriarchal notification to the saint only two months following the first, on July 11, 1890, which rendered any further stay by the latter in Egypt as unnecessary. (Metropolitan T. Matthaiakis, op. cit., pgs. 46-47.)

Along with the second patriarchal notification, a letter of discharge was sent to Metropolitan Nectarios on the same date (July 11, 1890). It stated that due to his inability to adjust to the Egyptian climate his service in the Church founded by St. Mark the Evangelist had to be concluded, and he would have to leave the patriarchate and go abroad. (op. cit., pg. 47.)

In the letter of discharge given to St. Nectarios, the cause of his removal from Egypt is stated to be his inability to adjust to the country’s climate. In a letter sent by Ioannis Gryparis, the political agent of Greece in Egypt at the time, to the minister of ecclesiastical affairs and public education, Demetrios Kallifronas, dated January 28, 1894, the primary causes leading to the removal of St. Nectarios from Egypt are stated to be his disobedience of Patriarch Sophronios, along with other reasons of an ethical nature. A more extensive account of this letter is provided in the following chapter.

We feel it necessary to examine the three aforementioned reasons for St. Nectarios’ removal from Egypt with slightly more insight. According to St. Nectarios’ letter of dismissal, the humidity played a key role in his leaving Egypt. In all likelihood, the poor climatic conditions of Egypt acted adversely upon Metropolitan Nectarios’ health, which may be inferred from letters exchanged between Metropolitan Germanos of Thebais and Patriarch Sophronios who was abroad at the time. Particularly, in letter dated August 25, 1889 which Patriarch Sophronios sent from Leros to Metropolitan Germanos, he expresses his concern and care for St. Nectarios, who was undergoing treatment at the hospital of the Monastery of St. George in Old Cairo. (Archives of the Patriarchate of Alexandria, file 123.)

In regard to the first reason, that is, that the damp climate of Egypt was the reason for St. Nectarios’ removal, we concede, according to the facts presented, that this condition was a contributing factor to a degree, but realistically, we believe the primary cause to have been the inability of those in the patriarchal court to adapt to St. Nectarios’ spiritual climate. The entire life and ministry of St. Nectarios struck a jarring note amidst the general climate of mediocrity that was prevalent. The consummate person of St. Nectarios, his presence, along with the saintly life he led became a measure for those surrounding the patriarch, to which they were compared to critically. These individuals chose not to follow the example set by St. Nectarios, choosing instead to follow the easy road of jealousy and slander. They felt an aversion toward his presence and his words, from which they came under scrutiny.

Concerning the second reason, his removal for disciplinary reasons, we make the following assertion. If Metropolitan Nectarios demonstrated an egocentric and rebellious inclination toward Patriarch Sophronios prior to his dismissal from the important responsibilities assigned to him, then what would be his reaction following his dismissal? From what we have seen until now, Metropolitan Nectarios commanded the respect and admiration of the dignitaries, as well as that of the Greek Orthodox and Muslim peoples of Alexandria, Cairo, and other Egyptian cities. If we interpret St. Nectarios’ so called undisciplined behavior as an effort on his behalf to overthrow the elderly patriarch and ascend to his throne, then we expect that he could have readily aroused popular support following his expulsion and accomplished the desired result thereby fulfilling his personal aspiration and that of his flock. However, St. Nectarios made no protests either before or after his reception of the two patriarchal notifications and the letter of discharge. He only asked that the patriarch hear his defense, and was denied this request. He then chose to remain silent and obey the orders of his ecclesiastical superior. In order that Patriarch Sophronios might not have the slightest reason to suspect that St. Nectarios did in fact desire to ascend to the patriarchal throne, which is what he was accused of, he bid him farewell and returned to Athens. He was well aware that if he followed upon any other course of action he would be destroying all the greatest virtues he had instilled in the souls of his spiritual children. Being a true man of love, he preferred to suffer injustice rather than destroy the image of hierarchy in the eyes of his flock by castigating his fellow hierarchs, and all those who slighted and slandered him. In reality, much of the blame lies with Patriarch Sophronios, who due to his old age (he was 88 years old at the time), was unable to recognize the poor moral character of those so closely associated with him. Selfishly attached to his throne, without investigating the origin and validity of the accusations hurled against Metropolitan Nectarios, and refusing to hear his defense, he was misled and believed the detractors of his own spiritual child. Since St. Nectarios’ arrival in the Church of Alexandria, his demeanor toward the patriarch exemplified in every aspect, that of a man who was loyal and grateful for the generosity he received, and who together with his multifaceted ability, proved to the patriarch that he was worthy of such benefaction.

Concerning the third reason of removal which was based on ethical reasons, according as always, to the views of the individuals connected to the patriarch, it is clear that this charge is unfounded because it contradicts with the letter of discharge given to St. Nectarios, according to which, he is free to perform his hierarchal duties wherever he may go. According to the Church canons, if St. Nectarios was truly immoral he would have to be placed on suspension or be defrocked. In his instance however, although the rumors circulated by the patriarchal clique held him to be unethical, according to the letter of discharge given to him by the very same individuals, he was worthy of performing his hierarchal duties. These are two things which are in direct contrast and incompatible. It is evident that the intent of the individuals of the patriarchal court was not to defrock Metropolitan Nectarios, but to stop his work and remove him from Egypt.

Since the Metropolitan of Pentapolis was irreproachable, those associated with the patriarchate were held to his standard. Since they could not tolerate his popularity and the reverence he received from the Christian flock, they contrived defamation as the classic weapon to use against him. Since however, “God works for the good of all who love Him,” this defamation would turn into a fountain of Grace for the Church of Greece in the years to come.

The bishop of Pentapolis was endowed with the spiritual knowledge to correctly interpret the injustices which he suffered, along with a courageous soul to withstand the tribulations which would follow. It was for the sake of greater diligence to his work that he met this temptation with paternal placidity. As we also know from other similar instances that occurred throughout his reverent life, he remained at peace and prayed for his persecutors.

The deep spirituality possessed by St. Nectarios prescribed that he remains silent in the face of the gross injustice done to him by individuals associated with the patriarch. He was sure that hidden behind this human injustice, lied the grandiose and unfathomable plans of God. It is significant that he was able to convey his faith and absolute belief in God to his flock in Cairo. A farewell letter given to him personally, on July 29, 1890 prior to his departure from Egypt, by a delegation of some nine hundred members of the Greek community proves this to be true. (Metr. T. Matthaiakis, op. cit., pgs. 56-57.) St. Nectarios permanently left Egypt in October of 1890, with Athens as his destination. (Records of the Holy Clergy of the Most Holy and Apostolic Throne of Alexandria, Codex 37, pg. 4.)