Address of Ecumenical Patriarch at the Holy Temple of St Nectarios at Battersea, London, 21 October 2022 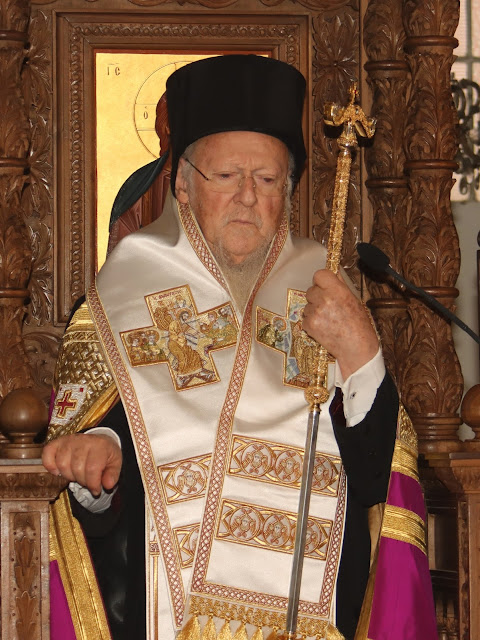 Your Eminence, Archbishop Nikitas of Thyateira and Great Britain,

It is with particular joy that we address you this evening as we celebrate this Vesper service here at this beautiful Church of Saint Nectarios in Battersea, having just arrived in London to celebrate together with all of you the centennial of our beloved and sacred Archdiocese of Thyateira and Great Britain, τῆς Ἱερᾶς Ἀρχιεπισκοπῆς μας. Commemorating this significant anniversary for Orthodoxy in Great Britain, we convey to every one of you the collective prayers and well-wishes of the Mother Church of Constantinople, its hierarchs, clergy, and faithful.

Already since the 17th century, many Greek Orthodox Christians, including those from our Queen of Cities, Asia Minor, the Aegean islands, the Greek mainland, and, eventually, Cyprus, were settling in the British Isles, building holy temples, acquiring others, and establishing communities despite facing the many challenges associated of moving to a foreign land.

However, it was a century ago, during a period of upheaval and chaos for our local and native population in Asia Minor, that countless refugees were forced to leave their homelands and relocate to Greece, Europe, and elsewhere. It was at this time that the Mother Church of Constantinople established this eparchy to unify the Orthodox communities of Western and Central Europe, namely in areas where Orthodoxy was a minority, thus ensuring the spiritual care for the faithful here. This context led to the bestowal of the important and Apostolic title of Thyateira upon the See based in this great global city, thus keeping one of the seven historical churches of the Revelation alive in exile and maintaining a link to our native lands.

Many things have changed during the past one hundred years, and your communities have welcomed numerous faithful from various backgrounds and walks of life who have come to all corners of this Archdiocese, but the mission of the Holy and Great Church of Christ remains constant here and throughout the world. Already looking forward to the future and recognizing the great potential in this historical eparchy, it is from our Venerable and Martyric Centre that we encourage you to continue to strive and work together under the leadership of Archbishop Nikitas in order to strengthen further and build the “Divine Trust” that you have inherited, τήν πατρογονική κληρονομιά καί παρακαταθήκη.

Further reflecting on what unites us, we note another tie between your local parish community here and the Mother Church, and this is located in the person of your patron saint, the Holy Hierarch Nectarios, whose memory we will commemorate soon at the beginning of November. As many of you may know, the Saint was born in nearby Silivria in Thrace in 1846. He eventually moved to our Great City for several years before continuing his studies and undertaking his pastoral mission in Greece and Africa. Despite the injustices and difficulties that he faced throughout his earthly life, his humility and example were among the reasons why the Holy and Sacred Synod – under the chairmanship of our predecessor, the Great Patriarch Athenagoras – recognized him as a saint. Therefore, noting his recognition and veneration throughout the world, we note that, for several years now, we have conducted a pilgrimage to Silivria and hope to do so again in a few weeks to honour this Saint in his birthplace. In like manner, we hope that you follow his example closely to continue your ministry and social support of the broader community, continuing to be good representatives of Christ’s Church in a world that is becoming increasingly secular and thirsts for the truth of the Holy Gospel.

Therefore, thanking you for the warm hospitality that you have shown to our humble person and entourage this evening, we greet the Reverend Protopresbyter Christodoulos Christodoulou, Pastor of this parish, and all the members of this community, and congratulate you for all the accomplishments that you have achieved throughout the years, and reciprocate by inviting you to visit the sacred sites in and near the shores of the Bosporus, including Silivria.

It is with these thoughts that we begin our visit to England, asking that our Lord and Saviour, Jesus Christ – through the prayers of Saint Nectarios – bless each and every one of you all always.