Archbishop of Athens and All Greece: “Welcoming the stranger is an integral part of Christian heritage” 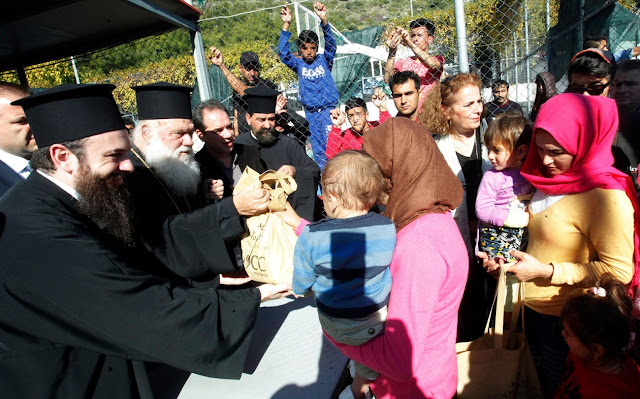 * By Claus Grue and Xanthi Morfi

Archbishop Ieronymos of Athens and All Greece offers reflections from an Orthodox perspective on the current plight of refugees, both in Greece and beyond, and how churches can help with both relief efforts and long-term wellbeing.

What is your assessment of the current refugee crisis from a Christian perspective?

Archbishop Ieronymos: Recognising that welcoming the stranger is an integral part of Christian and Greek heritage, it is with deep concern that the Church of Greece has been observing the developments in the refugee crisis. Guided by biblical teaching and our following of Christ, we cherish the dignity of all people and are constantly aware of our responsibility towards those in need.

For us, this crisis is actually a crisis of values and principles, calling into question the institutional framework of human rights respect and, theologically speaking, the respect of personhood.

Instead of solidarity, an essential EU principle, being the guiding aspect when managing migration and refugee reception, the unequal distribution of responsibilities between European member states has led to Greece and the other countries of entry being left to handle the situation in a manner that is in no way conducive to the ideals that Europe supposedly espouses regarding human rights protection.

The repressive policies implemented by the EU have resulted in thousands of international protection seekers having to endure long confinement in the overcrowded hot spots of the Aegean islands, living under indecent conditions with insufficient access to fundamental goods or services. In this context, the recent fire in Moria was just a tragedy waiting to happen.

Jesus tells us that our response to the stranger is a response to Jesus himself (Matthew 25.40).

Without overlooking the challenges and problems created, the Church of Greece identifies with the vulnerable and asks for a spirit of tolerance and goodwill as well as a commitment to constructive engagement.

How can the church you represent and faith communities in general make a difference for the refugees in Lesbos and elsewhere, here and now?

Archbishop Ieronymos: The Orthodox Church, understanding man as created after the image of God and the human society as an agapetic relationship of acceptance of and respect for otherness, has not stood idly during the refugee crisis.

Inspired by the long-standing Greek and Orthodox tradition of the “magnificent ethos of hospitality” and putting into action the evangelical call for assisting the brother in need regardless of colour, religion or origin, the Church of Greece has included the support of migrants and refugees in its acts and care as early as the 1990s.

Under the current circumstances, contributions in addressing the urgent needs of refugees can be mainly measured in the field of action. And, indeed I feel that the Church of Greece has managed to make a difference through its organisations, such as the Integration Center for Migrant Workers-Ecumenical Refugee Program as well as its thousand parishes which have been providing immediate relief and support.

We are currently operating five shelters for unaccompanied minors and we are ready to launch the operation of a further four as soon as funding resources become available, along with hosting adults and providing legal assistance.

These shelters are not designed as a mere temporary accommodation but rather as a safe space where through the provision of a wide range of services the children will be assisted so as to develop their potential and be prepared to enter adulthood, holding, hopefully, our support as a dear memory.

From a longer perspective, what role can the Orthodox Church and other faith-based organizations play in avoiding similar crises and relieving the pain and suffering we’ve witnessed for years?

Archbishop Ieronymos: Working towards eliminating the reasons that force people to move by improving conditions in countries of origin would ideally prevent similar crises. However, persecution, conflict and wars are still a dark reality in today’s world and we should accept our obligation to welcome and protect our suffering brothers and sisters.

So, what is mostly needed in Greece and Europe today is the creation of synergies so that all available funding is fully utilized for the benefit of refugees through the planning and implementation of targeted programs and actions. In order for these actions to be effective, the credibility of the actors involved, especially non-governmental organizations, is of high importance. If they do not operate in strict compliance with the national legislation and the European acquis, their interventions might create more problems than they solve.

The Church of Greece is always willing to provide its support, focusing mainly on two sectors:  hosting minor and adult refugees on the one hand and on the other further sensitizing Greek people who, I have to say, have, in their vast majority, displayed tremendous hospitality and readiness for support.

Throughout neighborhoods all around Greece, clergymen and lay people voluntarily stand every day by refugees. These are the people who also assist us with our shelters in order to be able to implement further activities that cannot be covered by external funding resources.

It is essential to note that the vast majority of the great number of refugees transferred from the islands to the mainland will most probably remain in Greece, therefore the discussion about the “day after” as regards these populations is imperative. In other words it is high time we engage in promoting the social integration of refugees in a way that is both fair to them and beneficial for the reception society. The most crucial parameter in planning this, is the development of ties, relationships and networks between refugees and local societies as well as encouraging refugees to participate in cultural and social activities so that the presence of the “other” will be considered an advantage rather than a threat.

The Church of Greece, since it is already spending huge amounts of money for the relief of Greek people in need especially in recent years, is constantly seeking and pursuing European and international collaborations in order to fund projects that will result in the maximum possible benefits for refugees and migrants.