A BEAUTIFUL LETTER FROM THE CHURCH OF CONSTANTINOPLE 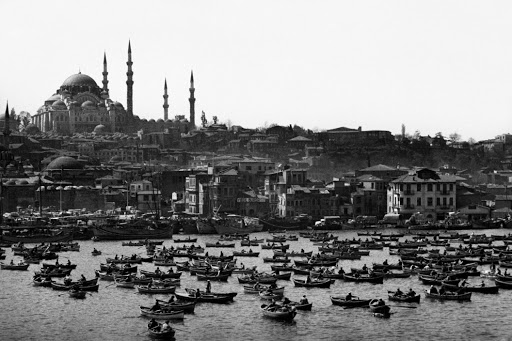 Was 1920 to the ecumenical movement what the ancient used to call annus mirabilis, an amazing year? If you are confined like me you may take time to think about it. We start our ecumenical tour of 1920 one year earlier.

1919. On 28 June of that year, a peace treaty was signed marking the official end of World War I. On 25 January of that year, a peace conference decided to move towards the establishment of a League of Nations for cooperation instead of war. On 30 November of that same year, victory was declared (mind you!) against the pandemic wrongly known as “Spanish” flu, which had infected approximately a quarter of the global population.


In that year of 1919 - a time for dreaming new ways of moving forward together locally and globally - the Orthodox Church of Constantinople, which enjoys a certain leadership among its sister churches, decided to continue its work, partly started back in 1902, of strengthening fellowship among its sister Orthodox churches and improving relations with other Christian churches, and first of all with the Anglican, Old Catholic and Armenian churches.

But how to address the other Christian churches, including those Western churches which persistently sent missionaries to Orthodox countries to convert Christians baptised in Orthodox churches? What to tell them? What to propose to them as a new way of moving forward together despite divisions, proselytism, mistrust and bitterness?

The Holy Synod of the Church of Constantinople asked the assistance of a committee which included several members of the faculty of the Church’s theological school in the island of Halki, today Heybeliada, near Istanbul. Halki, as you will see, was well prepared for that.

The principal of Halki happened to be a theologian quite familiar with Western Christianity and the early movements for Christian unity. Born in 1872 to a modest Greek family in the nearby region of Bithynia, Germanos Strenopoulos had studied in Halki, Leipzig, Strasbourg (like me) and Lausanne. A young theologian, he was back in Halki in 1904 as a professor of Dogmatics and New Testament. He was now Metropolitan Germanos of Seleukia.

I imagine that while he and his faculty colleagues were working on the proposal for improved relations with other churches, Metropolitan Germanos remembered a spring day of 1911, when he hosted a lunch for a distinguished Methodist visitor without knowing that the two of them were in fact writing a decisive chapter of the history of the ecumenical movement.

John Raleigh Mott (1865-1955), the global (trotter) leader of the world student Christian movement known as WSCF was dreaming of planting Christian student associations in universities of the Balkans. After visiting Orthodox churches in Serbia, Bulgaria and Greece, he reached Constantinople. And Halki. In the second volume of his Addresses and Papers, Mott writes in a letter of 17 May 1911 that “one of the most encouraging facts is that of the remarkable access which, as a representative of the student movement, I have been permitted to have to the Eastern Churches.”

Metropolitan Germanos welcomed Mott for lunch at Halki. Mott wanted to test the ground for an international students’ conference in Constantinople that same year. The two men could not imagine that in the distant year of 1948 they would be elected presidents of an improbable organisation called World Council of Churches. Towards the end of his May 1911 letter, Mott recalled memorable words Metropolitan Germanos told him over lunch: “where hearts are united, the resistance of the head will diminish. It was the looseness of the bonds of love which brought the divisions of Christianity.” The ground was favourable for a students’ conference.

The possibility of opening the then pan-Protestant World’s Student Christian Federation to Orthodox students led the WSCF leadership to change its membership policy. A resolution was passed that “no student, to whatever branch of the Christian Church he may belong, should be excluded from full membership…” As a result, thanks to the Orthodox students a fully ecumenical organisation was quietly born. Among the youth, the ecumenical movement was moving much faster than among their seniors who had gathered in Edinburgh one year earlier.

The 1911 WSCF Conference in Constantinople brought successfully together students from the Balkans, Middle East, Turkey and Egypt. It was also attended by a professor of history of religion at the University of Uppsala, named Nathan Söderblom. Strenopoulos became friends with Mott and Söderblom. Ruth Rouse, the WSCF secretary and Mott rejoiced in the achievements of the conference. In A History of the Ecumenical Movement, which she co-edited, she took note of his excitement: “When since the early Councils… has there come together a gathering representing so nearly the entire Christian Church?” Years later, the Anglican bishop Oliver Tomkins would write that Mott’s most far-reaching decision “arose from his encounter in the WSCF with the Eastern Orthodox Church.”

Early in the spring of that same 1919, a group of visitors from the US brought a new impetus to Strenopoulos’ mission of reflecting on the relations of the Orthodox Church with “the rest” of the Christian world. Those were the days my friend when travelling was not an easy game to play, but with a little help from a French cruiser, motor-cars and an American submarine they finally made it to Athens and Smyrna, and were now received at the Ecumenical Patriarchate in Istanbul.

The visitors were a delegation sent by the movement for a world conference on Faith and Order launched in October 1910 by the US Episcopal Church on the initiative of Bishop Charles H. Brent. Their mission was to present to the churches in continental Europe and the Middle East the purpose, plans and the invitation for a world conference which would address issues of doctrine and ministry that kept churches apart. We assure you, wrote the Holy Synod to the Faith and Order delegation, “that the Church of Constantinople, when the time and place of the conference are fixed, will send in time competent delegates.”

What Metropolitan Germanos and his colleagues wrote in that year of 1919 about how to improve relations with other churches was the basis for an encyclical or letter adopted and issued by the Holy Synod of the Church of Constantinople in January 1920 and addressed “Unto the Churches of Christ Everywhere,” “the venerable Christian churches in the West and everywhere in the world.”

Can a letter left with no answer become a classic of ecumenical literature? That was the case. I remember Bishop Stephen Neill calling it an “epoch-making document,” which has carried “great weight in all the Christian churches.” I also remember the first general secretary of the World Council of Churches, Visser ‘t Hooft speaking about it as “a fundamental fact of our own history which is not sufficiently known but which is of great significance.”

Signed by twelve metropolitans and published in Greek, English, French and Russian, the letter opens on a pro-active note. Our Church holds, wrote the bishops, “that rapprochement between the various Christian Churches and fellowship [koinonia] among them is not excluded by the doctrinal differences among them.” Rapprochement “is highly desirable and necessary.” The encyclical suggested ways of showing “friendship and kindly disposition towards each other.” This “will be all the more useful and profitable for whole body of the Church.” It proposed the creation of a League of Churches to “give the impetus for the union of all churches in Christian love.”

During the first WCC Central Committee meeting in an Orthodox land - Rhodos, Greece, 1959 - Visser ‘t Hooft announced the publication of a new English translation of the letter and dedicated the first section of his report to a reflection on its lasting significance. The new translation, unlike the previous one, brings into English the precise senses of the use of the term koinonia in the original Greek of the letter. The address builds on the meaning of this correction.

In Visser ‘t Hooft’s view, the encyclical used the Greek term koinonia in two senses: the traditional New Testament one of fellowship, communion; and in the modern one of association, society, like in the name “League of Nations.” The reference to fellowship in the opening words quoted above clearly carries the first sense. The reference to the establishment of the League (koinonia) of Nations uses the term in its modern sense. The call to the creation of a League (koinonia) of churches carries both senses.

The letter is close to the first sense when it urges “all Churches of Christ of different confessions” to look at each other as “members of the same body and partakers of the promise of God in Christ” despite their persistent divisions. In favour of this view, Visser ‘t Hooft quoted a lecture given by Metropolitan Germanos in Söderblom’s Uppsala in 1929: “How wide the conception is which the Encyclical teaches at this point, becomes clear in that it widens the notion of the relationships between the members of every single church – as members of one and the same body according to St Paul’s wonderful teaching – so as to apply to the relationships between the several churches,” to the koinonia among them.

Thus for Visser ‘t Hooft the lasting significance of the 1920 letter  – and here I try to take his argument a step forward - lies in the fact that what is implied in the letter’s interwoven use of the two senses of koinonia will echo in the Western theology of the vestigia ecclesiae or the elements of the Church that enabled one of the foundational documents of the WCC, the 1950 Toronto Statement,  to claim that the churches gathered at the ecumenical table called World Council of Churches were more than a sociological koinonia while fully retaining their respective understandings of what is the Church and its unity.

The architecture of the book is in itself a statement about the WCC: as a fellowship or koinonia of churches, the World Council of Churches is an imperfect koinonia inseparable from the biblical koinonia to which the churches are called and which is evoked in this foundational experience and catholic conviction of the modern ecumenical movement: beyond and despite our historical divisions, “we are one in Christ.” Let us therefore admonish each other, pray together, walk together, and work together towards full visible communion in his body.

— Dr Odair Pedroso Mateus is WCC Interim Deputy General Secretary. Ordained pastor of the Independent Presbyterian Church of Brazil, he holds a PhD in Protestant theology from the University of Strasbourg, France. He continued ecumenical studies at the WCC Bossey Ecumenical Institute. He was successively: general secretary of the Association of Protestant Theological Seminaries in Brazil and editor of its journal Simpósio (1995-1999); professor at the Methodist University of São Paulo (1999); secretary for theology and ecumenical dialogue of the World Communion of Reformed Churches (2000-2007) and editor of its journal Reformed World (2004-2007); President of the Foundation for Reformed Protestantism (2012-2016). He has been a lecturer at the Bossey Ecumenical Institute since 2006; member of the Secretariat of the WCC Commission on Faith and Order since 2007 and Director of WCC Faith and Order since 2015.