Address of Ecumenical Patriarch in the Liturgy at the Cathedral of the Divine Wisdom (London, 23.10.2022) 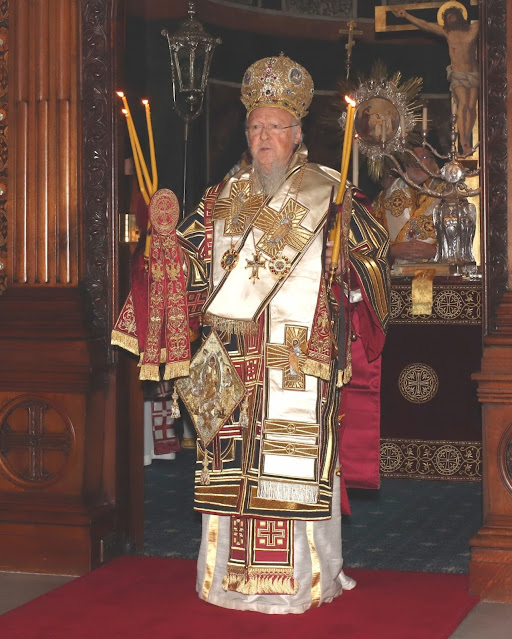 Your Eminence Archbishop Nikitas of Thyateira and Great Britain, beloved brother in Christ,

Your Eminences and Your Graces,

Honorable Archons of the Ecumenical Throne,

We give glory to the Lord, who has counted us worthy to celebrate the Divine Liturgy today in the Cathedral of Hagia Sophia, on the occasion of the 100th anniversary of the Greek Orthodox Archdiocese of Thyateira and Great Britain. On behalf of the Mother Holy and Great Church of Christ we give our patriarhal blessing to all of you and thank you all for your cordial and moving welcoming.

In today’s reading from Paul’s Letter to the Galatians, we heard how Apostle Paul, a former persecutor of the Christian faith, was called by the Lord to proclaim the good news of the Gospel to the world. It is this message that we wish to deliver to you today from the sacred center of the first throne of the Church of Constantinople. The sacred, agelong institution of the Ecumenical Patriarchate continues to cherish and proclaim the apostolic and patristic faith and to give light to the people of God.

In the midst of her great trials in the twentieth century, the mother Church did not fail to take important initiatives, such as the founding of the Metropolis of Thyateira. Metropolitan Germanos Strinopoulos of Seleucia, former Dean of the Theological School of Halki, was appointed as the first Metropolitan of Thyateira and Exarch of the Ecumenical Patriarchate in western Europe. He worked very diligently for the strengthening of the new Metropolis and the tightening of relations with the Church of England. The Greek cathedral of Hagia Sophia, this magnificent architectural monument, proved instrumental for the success of his ecclesial service and has been for decades the center of Orthodoxy and Hellenism in this hospitable country.

In the course of the twentieth century we witnessed with joy the expansion of the Greek population in London, the arrival of thousands of Greek Cypriots, the formation of a robust ship-owning community, and the founding of many new parishes in this city as well as across the United Kingdom. In recent years, many Greek and Cypriot students have flooded this country and joined our Church communities.

We commemorate with gratitude the former archbishops of this Archdiocese, Athenagoras I (Kavvadas), Athenagoras II (Kokkinakis), Methodios, and Gregorios. We also mention with reverence the Holy Patriarchal and Stauropegic Monastery of St John the Baptist in Essex, founded by Fr Sophronius, who was recently canonized by the Ecumenical Patriarchate. Finally, we would be remiss if we failed to mention the late Metropolitan Kallistos of Diocleia, who taught at Oxford University for thirty-five years and made Orthodox theology widely known both in this country and in the western world.

We greet the new King of the United Kingdom Charles III, great benefactor of Mount Sinai Monastery of St Catherine, regular pilgrim of Mount Athos and admirer of the Orthodox tradition. We wish him to follow in the footsteps of his late Mother Queen Elizabeth II, whose Christian faith and sense of duty proved exemplary. We also greet with brotherly love the Most Reverend Archbishop of Canterbury Justin, primate of the Church of England.

We conclude by underlining the significance of the Orthodox presence in the United Kingdom. Our Orthodox faith can offer the treasures of patristic theology and the light of Christ, which dispels the darkness of our modern world. We bless all of you who have gathered here today, the bishops, the priests, and the faithful laity.

The grace of our Lord Jesus Christ and the love of God the Father and the communion of the Holy Spirit be with you all, dear sisters and brothers in the Lord.