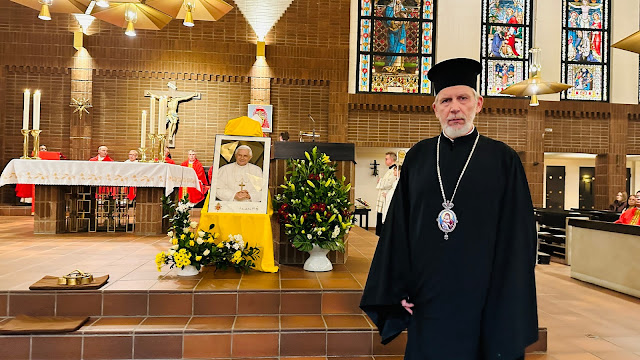 Reverend Members of the Clergy,

Honorable Representatives of the local Christian denominations and civic authorities,

We have gathered here today to honor the memory of the late Pope Benedict XVI (16th) and offer our fraternal condolences to our Roman Catholic friends for the passing of a historic pope, a world-renowned theologian, and a religious leader who left an indelible mark on the Roman Catholic Church, contributed to the promotion of inter-denominational and inter-religious dialogue.

First and foremost, allow me to convey the deepest condolences and fervent prayers of His All-Holiness Ecumenical Patriarch Bartholomew on the falling asleep of this seminal churchman and widely respected religious leader of global proportions. Together with the sentiments of the spiritual leader of the world’s Orthodoxy, kindly allow me to also convey my own sympathies and prayers, along with those of the Holy Metropolis of Sweden and All Scandinavia.

For Orthodox Christians, the repose in the Lord of this former bishop of Rome and pope emeritus affects it in a very personal way, beyond just the due honor and respect afforded to the leader of an ancient sister Church. According to the personal account of His All-Holiness Ecumenical Patriarch Bartholomew, Pope Benedict “had deeply influenced a number of Orthodox students” including two who would go on to rise to senior positions within the Church hierarchy – the ever-memorable Metropolitans Damaskinos of Switzerland and Stylianos of Australia.

As proof of his commitment to interdenominational dialogue and as a reflection of the significance he attributed to relations with the Eastern Orthodox Church, just 18 months into his papacy, Pope Benedict XVI personally attended the Thronal Feast of the Ecumenical Patriarchate on November 30, 2006, marking the renewal of the official theological dialogue between our two churches.

Less than two years later, in October 2008, Pope Benedict invited Patriarch Bartholomew to deliver a formal, central presentation—on “the word of God in the life and mission of the church”—to more than four hundred cardinals and bishops during the Twelfth General Ordinary Assembly of the Synod of Bishops of the Roman Catholic Church. The historic event, which was held in the Sistine Chapel, marked the first time that a Pope of Rome had asked an Orthodox Patriarch to offer a keynote address to a global synod of bishops. According to Patriarch Bartholomew, “it was an immense gift and invaluable honor, which shall always be treasured in the depth of my heart and in the history of our church.”

As I conclude, allow me to share with you a few excerpts from the historical document signed by Pope Benedict and Patriarch Bartholomew in November 2006, paving the way for the resumption of theological dialogue. “We must strengthen our cooperation and our common witness before the world… We should encourage the establishment of closer relationships between Christians, and of an authentic and honest interreligious dialogue, with a view to combating every form of violence and discrimination . . . committing ourselves to the renewed service of humanity and the defense of human life, every human life.”

With these thoughts in mind, I leave you today reiterating the support and love of the Orthodox Christian Church and our continual commitment to dialogue. Let us follow the example of Patriarch Bartholomew and Pope Benedict, as well as his successor Pope Francis, and let us continue to work toward unity and Christian reconciliation. May the Lord grant rest to the soul of the ever-memorable Pope Benedict. Eternal be his memory. Amen.