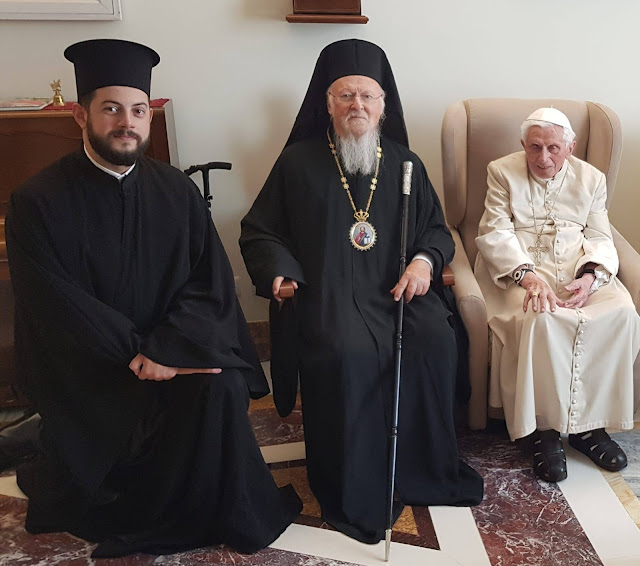 His All-Holiness Ecumenical Patriarch Bartholomew, in his customary speech, in the Throne Room of the Patriarchal House, after the Divine Liturgy for the feast of the Circumcision of the Lord and the memory of Saint Basil the Great, during which he officiated on New Year’s morning at the Venerable Patriarchal Church at the Phanar, referred to the late Pope Benedict XVI.

“I would like to say two more words, remembering with respect and love and gratitude the recent falling asleep of His Holiness Pope Benedict XVI, who at the beginning of his Papal Primate ministry officially visited our Ecumenical Patriarchate. Here, in this room, we signed a joint declaration. We worked together repeatedly.

Benedict XVI was a great theologian, German by origin as you know, for a number of years a University professor, he also had orthodox students, among whom were the late Archbishop Stylianos of Australia and the late Metropolitan Damaskinos of Switzerland, and I myself heard from Benedict saying that he got to know Orthodoxy better thanks to his Orthodox students, and indeed the aforementioned elite Orthodox theologians and Hierarchs. May his memory be eternal.

He had the fortitude and courage to resign only eight years after his election as Bishop of Rome. He could continue because he was in good health, but they judged that he should hand over the mandate, and this was about five hundred, six hundred years after the last resigned Pope of Rome.

At his funeral, which will take place next Thursday, our Ecumenical Patriarchate will be represented by His Eminence Elder Metropolitan Emmanuel of Chalcedon and His Eminence Metropolitan Polykarpos of Italy. May his memory be eternal.”