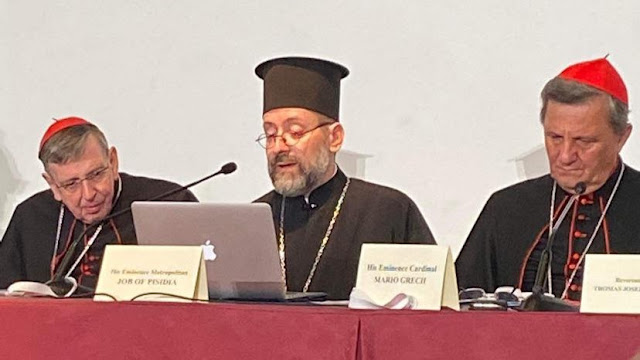 At the end of October and at the beginning of November, I was invited to address two important conferences on the theme of “synodality”: one in Hungary, at the famous Benedictine Monastery of Pannonhalma, and a second dedicated to “Synodality in the Life and Mission of the Eastern Orthodox Church” organized by the Institute for Ecumenical Studies of the Pontifical University Saint Thomas Aquinas (Angelicum) and the Pro Oriente Foundation.

While informing His All-Holiness Ecumenical Patriarch Bartholomew about my intention to participate in these conferences, he asked me what would be the theme. I responded, that it will be on synodality, since recently, Roman Catholics only speak about synodality! And he responded, that “This is very good”.

The reason why mainly Roman Catholics speak about synodality is probably founded on the words of His Holiness Pope Francis, seven years ago for the 50th anniversary of the institution of the synod of bishops, when he said on 17 October 2015 that “the path of synodality is the way that God expects of the Church in the third millennium” and suggested that the Roman Catholic Church has something to learn from the Orthodox Church on this topic.

The Joint International Commission for the Theological Dialogue between the Roman Catholic Church and the Orthodox Church has reflected on this issue since the resumption of the dialogue in 2005, that is to say for the last 17 years.

Indeed, the document of Ravenna, issued in 2007, is entitled: “Ecclesiological and Canonical Consequences of the Sacramental Nature of the Church. Ecclesial Communion, Conciliarity and Authority”. Its attempt is to deepen the study of the sacramental nature of the Church, as described in the previous documents of Munich (1982), Bari (1987) and Valamo (1988), and to address at the same time the thorny dividing question of primacy. The merit of the Ravenna document is to underline the inseparable bond of authority and conciliarity in the church, thus relocating the notion of primacy in the context of “conciliarity”, and to have identified a threefold actualization of conciliarity and authority (local, regional and universal).

Generally, in the Orthodox Church today, synodality on the regional level, at the level of the autocephalous Churches, is functioning regularly, since the Holy Synod of each patriarchal or autocephalous Church gathers regularly to administer ecclesiastical matters. And this is perhaps what most of the Orthodox understand when speaking of synodality.

However, synodality ought to be also implemented at the two other levels: the local and the universal. Unfortunately, the practice of synodality at the local level, at the level of the eparchy, is in most cases weak in Orthodox Churches since the administration of the diocese remains generally the exclusivity of the local bishop and his closer collaborators. On the other hand, the very long preparation of the Holy and Great Council of the Orthodox Church and the final absence of four autocephalous Churches at its meeting in Crete in 2016 testifies of the difficulties to implement synodality at the universal level in the Orthodox Church today.

For these reasons, it seems that synodality presents today many challenges to both Orthodox and Roman Catholics, and therefore, Christians have a lot not only to share, but first of all, to learn from each other in order to develop a more synodal Church in the third millennium.