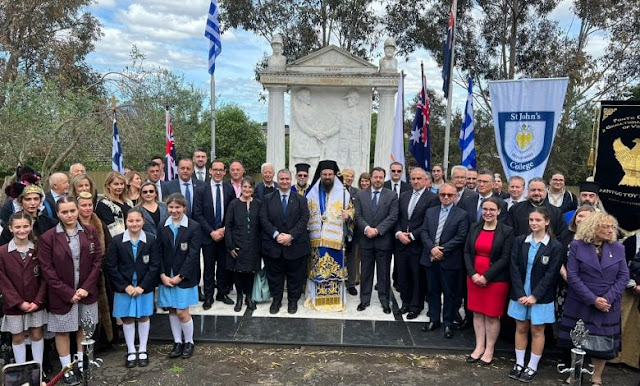 Following this, a Doxology was conducted on the Greek National Anniversary of October 28, 1940, where Bishop Evmenios read the message of His Eminence Archbishop Makarios of Australia and conveyed his prayers and blessings to the congregation.

This was followed by the reading of the chronicle of the historical “OXI / NO” and the recitation of poems by students from the two Greek schools, St. John’s College Preston and Oakleigh Grammar.

Afterwards, all who were present made their way to the monument located in the forecourt of the Church, where a Memorial Service was held for the heroes of the Epic of 1940, Conducted by His Grace Bishop Evmenios of Kerasounta and assisted by Fr. Konstantinos Apostolellis. The Consul General of Greece in Melbourne, Mr. Emmanuel Kakavelakis, offered a brief greeting at the memorial service. Present, among others, was the state Labor MP, Mr. Lee Tarlamis. This was followed by a reception for all the officials hosted by His Grace Bishop Evmenios of Kerasounta.

Then, under the sounds of the Macedonian brass, the Cretan and Pontic lyre and with the amazing presence of the dance groups of the Local Greek Community, this year’s festival was held in the forecourt of the Archdiocesan Church, the Holy Monastery of “Axion Estin”.

People began to arrive en masse from the morning hours, after the church service. The participation of the congregation in what was organised by the officials of the Archdiocesan District of Northcote. From very early on, the area filled and there left very little space, with the participants enjoying songs and dances from all over Greece. The most important thing is that this program was implemented by people of all ages, with endless passion and love for the culture of the Homeland of Greece, and this certainly promises a lot for the future.

The dance groups showed once again that they are justly among the best of the Greek diaspora. Dance teachers Parthena Tsombanopoulos, Michael Vassiliou, Despina Levoyannis, George Kyriakidis, Evangelia Starakis, Joseph Tsombanopoulos, take their responsibilities very seriously and this is distinguished by the style and dancing ethos of the young performers.

Many congratulations are also due to the ladies of the Philoptochos of “Axion Estin” Parish, as well as all the volunteers for their tireless efforts, in order to serve all the visitors of the events in the best way.